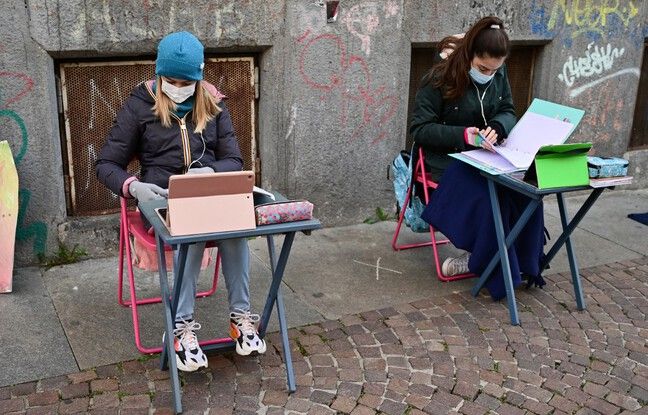 In Italy, Anita Iacovelli’s school had to close again in the face of the second wave of coronavirus, but this time the 12-year-old student refused to stay at home.

The Italian teenager therefore goes every day in front of her school in Turin (Piedmont, north-west) to demand its reopening, while the establishment has been closed since the beginning of the confinement of the region. Since November 6, the date on which the government classified Piedmont as a “red zone”, Anita Iacovelli, accompanied by her mother, has been going every day in front of the Italo Calvino school, named in homage to the Italian writer, to follow the courses remotely, installed on a chair and a desk brought by himself.

Called by the Minister of Education in person

After a few days, Anita, despite her uncomfortable makeshift settlement, was joined by her classmate Lisa and some students from a nearby college, to peacefully defend their access to education.

Every morning, Anita arrives with her neon pink chair and small folding table and settles down in front of her school, without forgetting to post a sign explaining her fight: “Present! School in the classroom is our right. Priority to school! “. Wrapped up in a hat and mittens so as not to catch a cold, she follows the lessons on her tablet.

Education Minister Lucia Azzolina even called her to assure her that schools would reopen soon. She “called me and congratulated me because she liked my fight, and told me that she would do everything to reopen the schools as soon as possible,” Anita told AFPTV.

“When they announced that the schools were going to close, I told myself I couldn’t stand another year of distance education. It’s hard to concentrate in front of a computer, and you can’t take the course like you would in class, ”she explains. “I miss everything about school: the face-to-face lessons, looking the teachers in the eye and not through a screen, being in the company of my classmates, waking up in the morning and getting ready for school instead of staying at home. home in pajamas in front of a computer ”.

Anita’s mother, Cristiana Perrone, supports her daughter in her fight. “She didn’t really ask my opinion… She said ‘I’m going to my school’. The morning when I told her that with the passage in the red zone the schools were going to close (…) she got angry, ”she confided. Italy, the first European country hit by the pandemic, deplores more than 45,000 deaths for more than 1.2 million cases.