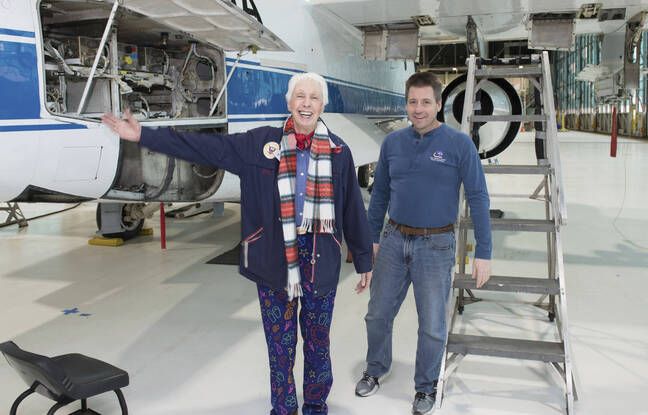 Little lucky girl. On July 20, Wally Funk will become the oldest person to travel in space. The 82-year-old will accompany Jeff Bezos on a flight from his company Blue Origin, the company said Thursday. She will be the fourth passenger on the space tourism company’s first manned flight, alongside the billionaire, her brother Mark Bezos, and the winner of an auction whose name has not yet been revealed.

In the 1960s, Wally Funk was part of a private program called “Mercury 13”, a group of 13 women who passed the same tests as the male astronauts selected under NASA’s Mercury program to send the first Americans. in the space.

“I didn’t think I would go up there someday”

“They told me I got the job done better and faster than any of the men,” Wally Funk said in a video posted to Jeff Bezos’ Instagram account at the time of the announcement. “I said I wanted to be an astronaut. But no one wanted to take me. I didn’t think I would ever go up there. “

“Nobody waited that long,” wrote Jeff Bezos in his post. “Welcome to the crew, Wally. Wally Funk became the first female inspector for the US aviation agency, the FAA. Pilot, she has accumulated 19,600 flight hours.

Passengers will be able to float in zero gravity

Blue Origin’s rocket New Shepard is scheduled to take off on July 20 and reach the Karman Line, which internationally conventionally marks the start of space, 100 km above Earth. The prestigious passengers will then be able to float in weightlessness for a few minutes and observe the curvature of the Earth.

Then the capsule will begin a free fall to return to Earth, and will be slowed down by three large parachutes and retro rockets before landing in a desert in West Texas.

Share
Facebook
Twitter
Pinterest
WhatsApp
Previous article“There is so much stock that it will be a waltz of the labels”
Next articleBehind the 100th anniversary of the Communist Party, all is not so well for Beijing