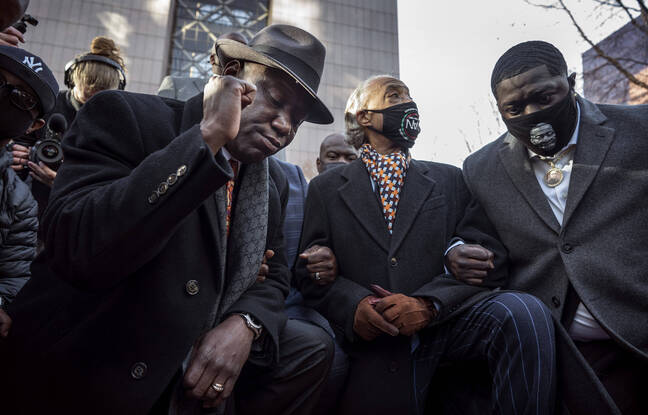 The whole planet has already seen these images. But at the opening of the trial of ex-policeman Derek Chauvin, tried for the murder of George Floyd, Monday, the jury endured the entire “nine minutes and 29 seconds” of an unbearable video. On 27 occasions, this African-American arrested after having bought cigarettes with a counterfeit bill shouted “I cannot breathe”, handcuffed and immobilized on the ground, Derek Chauvin’s knee pressing on his neck.

“You can trust your eyes. It’s homicide. It’s a murder, ”said Jerry Blackwell, one of the attorneys on the prosecutor’s team. The defense, she assured that George Floyd had died of a “cardiac arrhythmia” after having “swallowed a mixture of methamphetamine and fentanyl”. The cause of death should be at the heart of a high-tension trial, with more than 3,000 police officers mobilized for the verdict expected in late April or early May.

The video of the drama presented at the opening

During the 60 minutes of his opening statement, Jerry Blackwell presented a two-step strategy. According to him, the ex-policeman Derek Chauvin, who wore the badge for 19 years, made “excessive use of force” and it is the pressure of his knee on the airways of George Floyd which caused his. death “breath after breath”.

The lawyer relied on a video filmed by a passerby. He recalled that George Floyd was unarmed, was handcuffed, faced five police officers and “posed no threat”. According to him, a choke hold, authorized at the time of the facts to immobilize a dangerous suspect – and since banned by the city of Minneapolis – was “not justified”.

If Derek Chauvin is, according to him, guilty of second degree murder, a charge which retains the intentional character and is punishable by 40 years of imprisonment, it is “for what he did” but also “for what he did. did not do “. “Check his pulse”, “he’s passed out”, “give him heart massage”. During those nine minutes, passers-by shout and beg the police to stop. Derek Chauvin remains unmoved and does not turn George Floyd into the side-safe position to allow him to breathe, as the town’s police manual recommends.

The reactions of Derek Chauvin (right) are difficult to discern behind his mask but during the 90 minutes of the opening statements, he was often seen taking notes, including during the broadcast of the video of more than 9 minutes shown to the jury #ChauvinTrial pic.twitter.com/2vkTyZ728g

Behind his mask, Covid-19 obliges, impossible to read the reactions of the ex-police officer in the courtroom. During this first morning, we mostly saw him actively taking notes, especially during the broadcast of the video.

While prosecutors limit themselves to this period of just over nine minutes, the defense has focused on the events leading up to the arraignment. Lawyer Eric Nelson reminded the 12 jurors that the manager of the convenience store had asked George Floyd to return the cigarettes or to pay with a real ticket. That he had reported that Floyd “looked drunk” when he called the police.

Nelson promised that he would present evidence that George Floyd “swallowed drugs to conceal it from the police”, according to him, a “speedball”, a mixture of methamphetamine and fentanyl. The lawyer insisted, George Floyd died, according to him, of a “cardiac arrhythmia resulting from his hypertension, of a coronary artery disease (heart disease), of an ingestion of methamphetamine and fentanyl and of adrenaline present in his. organization. “

The prosecutor tried to discredit this defense, pointing out that during an opioid overdose, a person “falls asleep in a few minutes” while George Floyd was “alert” before being immobilized by Derek Chauvin. The testimony of the forensic pathologist, who concluded that a “homicide by cardiopulmonary arrest” occurred after “immobilization and compression of the neck”, will be decisive. The defense indeed noted that it had not concluded with an “asphyxiation”, contrary to a second autopsy carried out at the request of the family of George Floyd. Crucial elements while the verdict, expected in a month, must be pronounced unanimously and established by each juror “beyond reasonable doubt”.