“A big slap …” Mistreated by the crisis, the Curé of Nantes keeps his faith 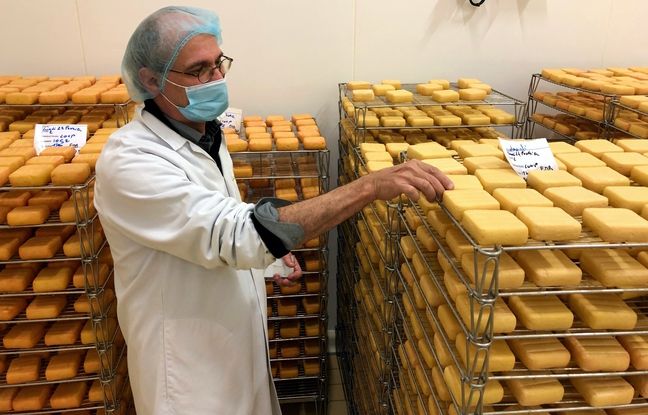 It is one of the rare emblematic cheeses of the Pays-de-la-Loire region. Although little known nationally, the Nantes Curé is a must in Loire-Atlantique and in Pornic in particular, where it has been produced since the 1980s. Very popular with upscale restaurateurs and creameries, this soft cheese made from raw milk cow production has more than doubled over the past ten years. But this growth was suddenly stopped with the health crisis.

Because after producing nearly 250 tonnes in 2019, the Pornic cheese factory managed to produce barely 150 tonnes last year. “It gave us a big slap. If we weren’t supported by a group, we might have gone out of business, ”recognizes Pierre Gairot, workshop manager at the cheese factory, owned by Triballat Noyal (Sojasun, Vrai, Petit Billy, etc.) since 1999.

It must be said that the Curé of Nantes was strongly penalized by the closure of restaurants (40% of sales), a problem which “unfortunately has not been resolved”. It has also undergone the change in strategy of mass distribution, which refocused a year ago on predominantly industrial products. “Supermarkets usually represent 30% of our sales. When the crisis hit, she terminated the contracts overnight. It was a disaster, ”says Pierre Gairot. The cheese factory found itself with “thousands of cheeses on its hands”, which it had no choice but to sell off, sometimes by “going door to door”.

As if that were not enough, the aging in the cellar, the natural process of which was disrupted by the cessation of production, slowed down the recovery for several weeks, creating a shortage. “We work on living matter, that’s what makes the charm and complexity of this profession,” insists Pierre Gairot.

If it will have “shaken” the twenty employees of the Pornic site, this episode has in any case “served as a lesson”, assures its manager. “We want to depend less on mass distribution and work more with Internet platforms and regional suppliers. We also hope to develop direct sales. »The export could also be strengthened. “Today we sell Curé Nantes in Belgium, the Netherlands, Great Britain, Sweden and even Japan. This is good for the brand image but it is not very important in terms of volumes ”, indicates Pierre Gairot. Given the context, the cheese dairy extension project, envisaged to allow an increase in activity, is postponed.

The Curé of Nantes is marketed in three formats: square (its original model), round and large (for sale by cutting). Legend has it that its recipe was invented nearly 130 years ago by a certain Pierre Hivert, a resident of Saint-Julien de-Concelles, on the advice of a Savoyard priest. This is perhaps why this cousin of Maroilles and Munster also looks a lot like Reblochon. The milk is collected every morning, immediately after milking, from six producers located in Pornic and the surrounding area. “The Nantes Curé is an integral part of Pornic’s image. He is an ambassador for the city, just like the Fraiseraie. It’s also a great story for men, ”says Patrick Prin, one of the partner breeders.