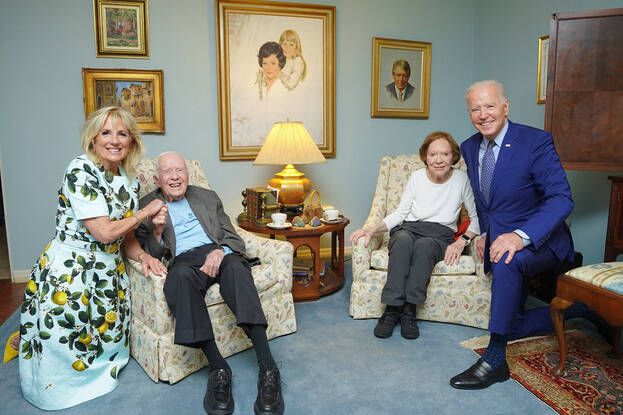 The meeting on April 29 between the oldest American president still alive and the oldest president to enter the White House continues to speak on social networks. But the ages of Joe Biden, 78, and Jimmy Carter, 96, are not at all at the heart of the discussions. The tweets and other publications of Internet users in fact relate to the astonishing snapshot published on May 3 to illustrate this visit.

In the photo, provided by The Carter Center, we can see Jimmy and Rosalynn Carter and Joe and Jill Biden. The latter came to visit in Georgia the man who occupied the White House from 1977 to 1981 and of whom Joe Biden is a friend. Such a photo is usually rather classic and is intended only for the political pages of the dailies. But this time, it was shared rather for the amusement which it provokes in spite of itself.

The Carter’s seem to have shrunk

Indeed, the angle taken by the photographer changed the proportions of the protagonists, but not uniformly. Thus, in the photo the Biden appear very tall while the Carter seem to have shrunk. As the Swiss newspaper notes The morning, “Joe Biden, though kneeling, seems twice the size of the chair and Rosalynn Carter herself. So of course, the president is 1.82 m and she is 1.65 m. But Jill Biden is 1.68 m tall and is therefore shorter than Jimmy Carter who is 1.77 m ”.

According to the American site meaww, even if no official explanation has been given, it should not be assumed that over time the Carteres have become Hobbits. The reason would in fact be more technical: the size of the house forced the photographer to use a wide-angle. The optical illusion sometimes generated by this device added to the imagination of Internet users then did the rest.