A few weeks before the election, the privatization of TERs is the subject of debate 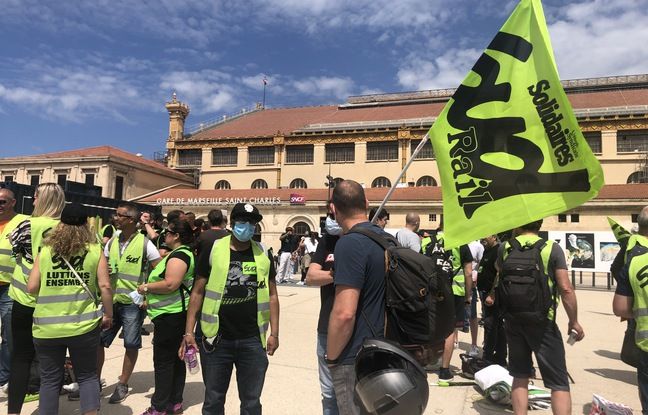 The forecourt of Saint-Charles station gradually fills with flags and other demonstrators, a “Sud Rail” vest on the back. This Thursday, at the call of this union, several hundred railway workers came from all over France to Marseille alongside their colleagues from the Provence-Alpes-Côte d’Azur region to protest against “social dumping” and privatization of TER.

Solidarity alongside the comrades of SUD Rail in Marseille to say: ⬇️⬇️
⛔ NO to the scrapping of the public rail service, NO to the privatization of rail and NO to social dumping… ✊🏼 pic.twitter.com/A5dJC0JqnN

If Renaud Muselier is re-elected, the Paca region would indeed be a pioneer in this area, President LR having made him one of his hobby horses. A 2019 vote from the regional council already calls for tenders for two lots: the line which connects Marseille to Nice, and the “Riviera” services which bring together the lines Cannes-Grasse, Les Arcs-Draguignan-Vintimille , Cannes-Nice-Monaco-Vintimille as well as Nice-Tende. “The final offers are expected in July 2021 for an allocation in the fall of 2021”, indicates the entourage of the one who is candidate for re-election in a few weeks.

“There is still time to sound the alarm bell”

As the outcome approaches, the railway workers are trying everything to stop this process. “The candidates for regional and the future regional council can decide to stop everything, and this is what we ask, hopes Frédéric Michel, regional secretary in Paca of the Sud-Rail union. Trains must remain a public service, and this process also risks increasing prices. “.

And to add: “Of course the train is moving, but there is still time to sound the alarm bell. There is no inevitability in this matter. We are told that we cannot do otherwise under European regulations. But it’s wrong. The European regulation provides for the possibility of a derogation in the call for tenders to award it directly to an operator which could be SNCF. “

An opinion shared by the list of left to the regional, which affirms to want to stop everything in the event of election. “Nothing has been committed,” says Capucine Edou, head of the list in the Bouches-du-Rhône. There was no notification of the tender. There is no rush to launch it. The European Commission sets the date of 2023. We are not there and we must not rush. For us, competition is not the solution: the question of transport must remain a question of public service! “

On the side of the RN, leading the voting intentions in the first round according to the latest polls, we want to be more measured. “We will not stop the call for tenders,” says Franck Allisio, spokesperson for Thierry Mariani for his regional. To refuse it would be out of pure ideological principle. We are going to review the offers that are offered to us and if the one that appears in all respects the best, especially in terms of service for the user, we will choose it … Even if it is the SNCF! “

“This decision was notably guided by the very poor service rendered in 2016, defends himself Renaud Muselier, by the voice of his entourage. Today we have significantly improved the quality of service, and that is in part thanks to the initiation of this process. And the outgoing president obviously does not intend to stop there. In his program announced on Monday, the LR candidate to his succession proposes, in the event of re-election, to open a new line to competition: the one which currently links Marseille to Briançon.