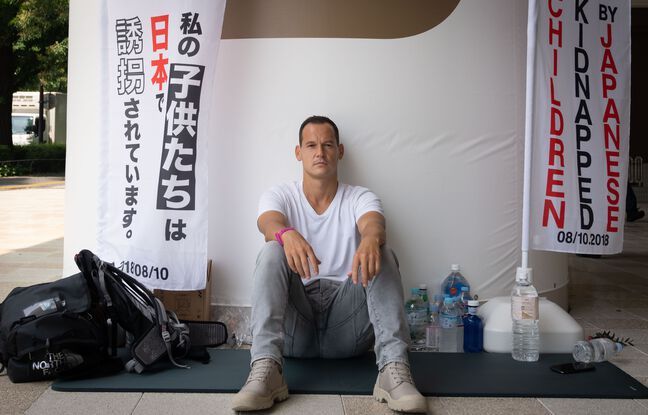 Vincent Fichot, a Frenchman whose children were abducted in 2018 by their Japanese mother, began a third week of hunger strike this Sunday in Tokyo (Japan). While he was there for the opening of the Olympic Games, Emmanuel Macron spoke the day before with Japanese Prime Minister Yoshihide Suga the “extremely tragic situation” of this thirty-something according to the Elysee, expressing his desire to succeed to “results”.

“It’s good that Suga and Macron still spoke about my case (…), but that does not change the situation in which my children are, so I continue,” said Mr. Fichot on Sunday. “France doesn’t even know if my children are alive or not, and the relationship between Japan and France is described as exceptional (…). It’s amazing, it’s the ‘business’ before and our children after, ”he was also indignant.

On hunger strike since July 10

Since July 10, this 39-year-old former finance employee has been installed day and night on a yoga mat, under the courtyard of a train station near the Olympic stadium. His health is starting to deteriorate and he says he now suffers from the slightest effort. After having tried everything before the Japanese courts, he took this action in the hope of pushing Paris to take “sanctions” against Japan for non-compliance with its international commitments on children’s rights.

The principle of shared custody in the event of parental separation does not exist in Japan. Also, parental abduction is a widespread and tolerated practice in the country. Local associations estimate that parental abductions concern 150,000 children each year in the archipelago.

In August 2018, Vincent Fichot’s Japanese wife left their home with their two children, now aged 4 and 6. He hasn’t seen them since. Established for 15 years in Japan, the man has become a “spokesperson” for many Japanese in the same situation as him, believes François Roussel, adviser to French people living abroad elected in Japan.

A judicial investigation for the removal of minors targeting his wife was opened in France at the end of 2020 and the Frenchman is part of a group of ten parents from four different countries who filed a complaint against Japan with the United Nations Human Rights Council. United in 2019. But within “2-3 months”, the Japanese justice will pronounce his divorce and from there, he will have “no more legal ties” with his boy and daughter, he explains. “I really wanted to maintain this link to give France a way to negotiate a return of my children (…) and there, France has just wasted the last cartridge. “

“This team is holding up” … Are the Sang et Ors yet to be the good surprise of the season?