A herd of elephants escapes, trucks block them 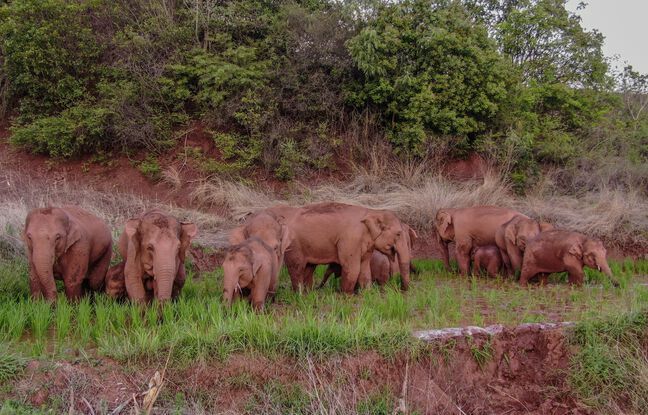 Dump trucks have been lined up on the edge of homes in southwest China as a bulwark against wild elephants escaped from a reserve that have already caused millions of yuan in damage. The fifteen pachyderms, including three baby elephants, left their reserve in Xishuangbanna, a border region between Laos and Burma, in mid-April to head due north some 500 km, Chinese television reported.

POOPED PACHYDERMS: China’s wandering elephant herd have become a viral sensation in the country, with videos of them doing everyday activities like resting racking up hundreds of millions of views. https://t.co/AWXzVrFZlm pic.twitter.com/WCikIE1IdW

History fascinates social networks and holds the country in suspense. The reason for their unusual migration remains a mystery, but the elephants ransacked corn fields in their path and caused extensive material damage.

The herd is followed by drone

This Sunday, the public channel CCTV broadcast images of a convoy of trucks parked along a small country road in an attempt to keep the herd away from densely populated areas. “We are here to block the elephants”, told the media a driver installed in his red vehicle and who said he was acting at the request of the authorities.

“As long as I am needed, I will stay here,” he said, on the outskirts of Kunming, a metropolis with more than eight million inhabitants. The authorities also mobilized thousands of people to follow the movements of the herd with drones and infrared cameras.

They get closer to the villages

CCTV footage from the weekend showed the elephants casually strolling through the streets of a village, leaving flattened trees and damaged garage doors behind. Since the start of their journey in mid-April, they have devastated around 56 hectares of crops, for damage estimated at 6.8 million yuan (870,000 euros), Chinese television said last week.

Zoologists do not understand what caused the herd to leave their reserve for such a long distance. Wild elephants are protected in China, with an estimated population of 300, compared to less than 200 in the 1980s. They live exclusively in the tourist and tropical region of Xishuangbanna. The pachyderms, however, tend in recent years to move closer to villages, while the plants they usually eat are replaced by inedible species.