A herd of elephants is currently crossing the country, looting crops in its path 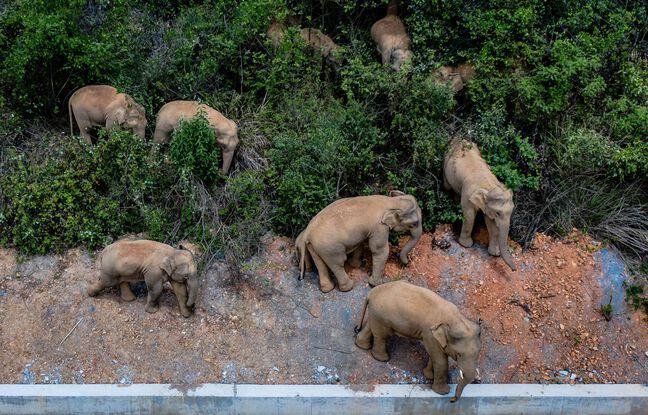 The elephant patrol moves heavily, the trunk forward, ears blowing in the wind … A herd of about fifteen pachyderms is currently circulating through China. Leaving their reserve in Xishuangbanna, a region bordering Laos and Burma, in mid-April, they headed due north for some 500 km, Chinese television reported.

The group of three baby elephants thus made a walk of several hundred kilometers in southwest China, crossing cities and highways. On Tuesday, the herd was only 20 km from the metropolis of Kunming, the capital of Yunnan province, which has several million inhabitants.

National television broadcast images of animals crossing cities at night, stationing on major roads or sacking corn fields. Their peregrination is closely monitored by the inhabitants and the authorities, equipped with drones in order to avoid any risk for the population.

During the past week, the elephants have emptied a water tank and a farm’s grain reserves, according to television, which estimates the damage since the start of their journey at 6.8 million yuan (870,000 euros ), with 56 hectares of crops destroyed. In an attempt to channel them, the authorities are trying to entice them with food and block roads with the help of trucks.

No explanation for this leak

Zoologists do not understand what caused the herd to leave their reserve for such a long distance. The pachyderms, however, tend in recent years to move closer to villages, while the plants they usually eat are replaced by inedible species.

Wild elephants are protected in China, with an estimated population of 300, compared to less than 200 in the 1980s. They live exclusively in the tourist and tropical region of Xishuangbanna.