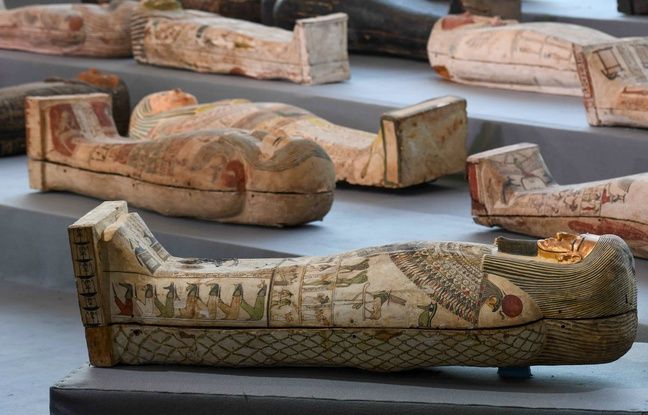 The treasures are revealed one by one in Egypt. After the discovery of about sixty sarcophagi last month, the country unveiled this Saturday a new extraordinary archaeological discovery. A hundred coffins, more than 2,000 years old and in perfect condition, were indeed presented.

These wooden coffins belonged to high officials of the Late Period (for the uninitiated, between 700 and 300 BC) and the Ptolemaic period (323 to 30 BC), and were discovered in the Saqqara necropolis, south of Cairo. “Saqqara has not yet revealed all that it holds. It’s a treasure, ”said Khaled el-Enani, the Egyptian Minister of Tourism and Antiquities, during the ceremony.

“The excavations are still in progress”

The site of Saqqara, which is just over 9 miles south of the Pyramids of the Giza Plateau, is home to the necropolis of Memphis, the capital of ancient Egypt. It is classified as a Unesco World Heritage Site. The hundred sarcophagi unveiled this Saturday were discovered in three funeral shafts, 12 meters deep. “The excavations are still in progress. As soon as you empty a funeral shaft with sarcophagi, you discover another, ”added Khaled el-Enani.

Archaeologists opened one of the coffins, inside of which lay a mummy wrapped in a shroud decorated with colorful hieroglyphics. More than 40 statues of ancient deities and funeral masks were also found, according to the minister. Two wooden statues were also found in the tomb of a judge of the Sixth Dynasty, dating back more than four millennia.

Tourism in the sights

These finds will be distributed in several Egyptian museums, including the Grand Egyptian Museum, which is to open on the outskirts of Cairo near the pyramids of Giza. According to the minister, these recent discoveries are the result of increased excavation work in recent years. Another discovery in the necropolis is to be announced in the coming weeks. Archaeologists also hope to soon discover an old workshop for making coffins for mummies.

Egypt hopes that all these finds and its new museum will revitalize tourism undermined by political instability and the attacks after the 2011 revolution that drove Hosni Mubarak from power, and by the Covid-19 pandemic.