A lunar base project, the ultimate proof of the rapprochement between China and Russia? 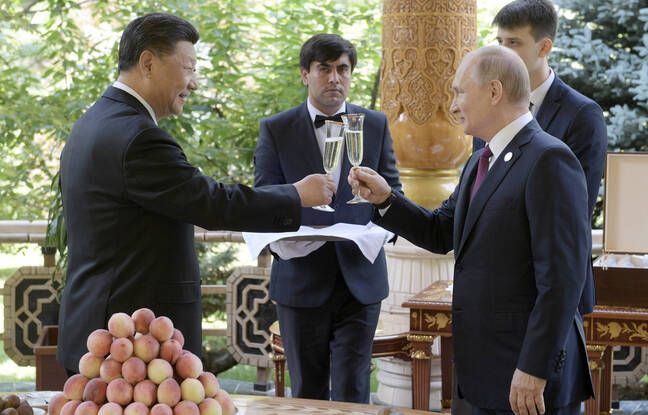 Imagine, the Russian and Chinese flags “floating” high on a lunar space base. Science fiction? Certainly for the moment, but the two powers have at least agreed on the principle in a memorandum. No budget, no timetable is mentioned, which casts doubt on the reality of the commitment, but all the same: Beijing and Moscow are getting closer on the international scene. This agreement is only the last episode of this romance on the Amur River, which marks the border between the two countries in the Far East.

For a long time, however, there was mistrust between Russia and China. Ten years ago, the legal obstacles to Chinese investment in Russia were numerous: “The Chinese could not participate in the exploitation of hydrocarbon deposits or in technological cooperation with Russian companies,” recalls for 20 Minutes Jean de Gliniasty, research director at Iris, author of A brief history of Franco-Russian relations (Ed. The Inventory). Today these constraints are lifted and the share of Chinese imports in Russia has increased from 10 to 20% in a decade.

The Ukrainian crisis: the seesaw

The trigger mainly took place in 2014, during the Ukrainian crisis. At the time, Russia occupied part of eastern Ukraine and annexed Crimea. The European Union and the United States see red and decree significant economic sanctions against Moscow, failing to be able to prevent the modification of borders. “It is in this context that Russia turned to China to find other outlets”, explains to 20 Minutes Alice Ekman, Asia Analyst at the EU Institute for Security Studies (EUISS).

Since then, cooperation has been going well. “This is an informal agreement but which nevertheless materialized through a whole series of somewhat technical agreements on gas and energy, on education…”, explains Jean de Gliniasty. For example, Russia has long criticized China for having “stolen” its Sukhoi military plane and for competing with its copied plane. Today, the two powers are cooperating on an aircraft competing with the Airbus A350. One thing led to another, so we came to this agreement on a hypothetical space station around or on the Moon.

Then joint military exercises have multiplied since 2014, from the Mediterranean to the China Sea, via Siberia. Finally, there is institutional cooperation, in the large organizations where the two countries sit. “At the UN or in other multilateral institutions, the two countries support each other on certain issues and try not to contradict or overshadow others,” notes Alice Ekman. It is now very regular for China and Russia, both permanent members of the UN Security Council, to block Western attempts at resolution. Lately: it has been impossible to pass even a declaration on the coup d’état in Burma.

All these well-understood pragmatic interests are not, however, sufficient to fully explain this new proximity. The rapprochement, surprising as it may seem at first glance, is also ideological. “Chinese and Russian governments share strong anti-Western resentment,” notes Alice Ekman. Both countries want to show that the West is in decline. Of course, this is not a total ideological convergence, but this conceptual convergence should not be neglected. What better way to install the idea of ​​a counter-model than to have the objective of going, for good, to the Moon?

It remains to be seen whether all of this can go further. Many people point to the imbalance between the two countries. Russia, 144 million inhabitants, a GDP close to that of Spain or Italy and a military budget barely higher than that of France (60 billion dollars) faces China, 1.4 billion inhabitants, second largest GDP in the world, 200 billion military budget. One of the two is clearly in a weak position: “Russia has no choice in this relationship because it has been ostracized by the West. China has a choice and is being courted, ”analyzes Jean de Gliniasty.

Alice Ekman is less categorical and considers the imbalance less obvious than it appears: “China has to learn from Russia, particularly in military and strategic terms. It is Russia that is helping China develop an early warning system for missile defense. On disinformation, the political use of social networks, Russia has expertise that may be of interest to China. A formal military alliance between the two does not seem credible at the present time. Beijing has long refused the NATO-type alliance system.

Two conditions for it to last

The continuation of the story between China and “its best friend”, in the words of Xi Jinping, the Chinese president, will depend on two things. First, the interpersonal relationship between, precisely, Xi Jinping, and Vladimir Putin, the Russian president. Currently frankly good, this relationship has largely made it possible to overcome the traditional mistrust, which undoubtedly still exists at the base of society, between Russians and Chinese. “As long as the two remain in power it will continue. Good understanding therefore has several years ahead of it, ”thinks Alice Ekman.

Finally, even if this good Russian-Chinese understanding is not just circumstantial, there is a “hard core of common interests”, believes Jean de Gliniasty, much depends on China’s relations with the United States and on Russia with Europe. “Historically Russia’s priority has always been the West and Europe. And if the tension between China and the United States were to increase further, Russia could face a difficult choice between breaking with the West for good or breaking with China. Sailing on the Amur River, between China and Russia, is still sailing on dark and meandering waters.