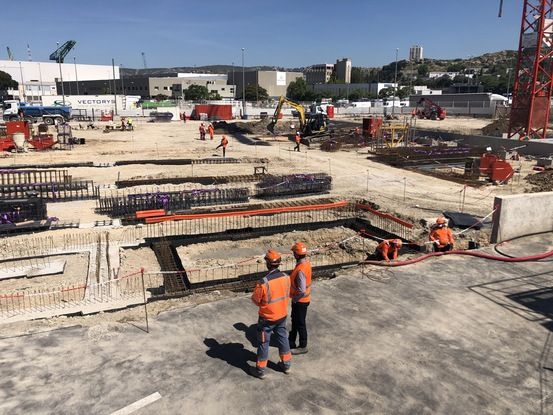 For the moment, we see only workers in orange chasuble and cranes, on this official day of laying of the first stone. But on this immense vacant lot in the large seaport of Marseille, along the motorway, a new giant data center will emerge from the second quarter of 2022, with a total surface area of ​​6,700 m².

Called MRS4, this infrastructure of the Interxion company, which has invested no less than 125 million euros in this project, will be the fourth giant data center of this major player in the sector in six years of establishment in the Marseille city. In recent years, Marseille has indeed risen to ninth place among global Internet hubs, ahead of megalopolises like Los Angeles in this booming market.

“I will not hide from you that I am quite surprised that sometimes our large American customers, such as Microsoft, Amazon or Facebook, know much more than most French people of the importance of Marseille in this area”, launches Fabrice Coquio, president of Interxion France. A story that began in 1999, thanks to a meeting between the then mayor Jean-Claude Gaudin and the former owner of OM Robert-Louis Dreyfus, also at the head of the telecoms company LDCom . “I think we were one of the first to do that,” says LR president of the region Paca Renaud Muselier. He’s the one who brought us the first cable. “

Twenty years later, Marseille’s water and underground are full of cables and have transformed Marseille into a major place for the exchange of computer data. “Marseille benefits from a geographical advantage, analyzes Fabrice Coquio. It is the shortest way, therefore the most profitable and the fastest, to link Africa, the Middle East, India or even Asia to the European continent, and in particular Paris or Frankfurt ”, two other global hubs.

An activity that has direct consequences on the local economy. “The establishment of this fourth data center is real proof of the attractiveness of the Marseille territory for strategic companies,” says Juliette Trignat, secretary general of the prefecture of Bouches-du-Rhône. Hosting these data centers is a real chance for Marseille and good news for jobs. The installation of each data center allows the creation of about thirty direct jobs on the operation and many indirect jobs. “

A recent contract with a Chinese customer was signed by Interxion, in order to set up a cable next June that connects Marseille to China by following the Silk Road. In 2022, another cable will be operational between Marseille and Africa, in particular to serve Facebook’s needs in this market. A success story that does not intend to stop there: Interxion intends to make Marseille the world’s fifth Internet hub within two years.