A progressive program that risks clashing with political reality 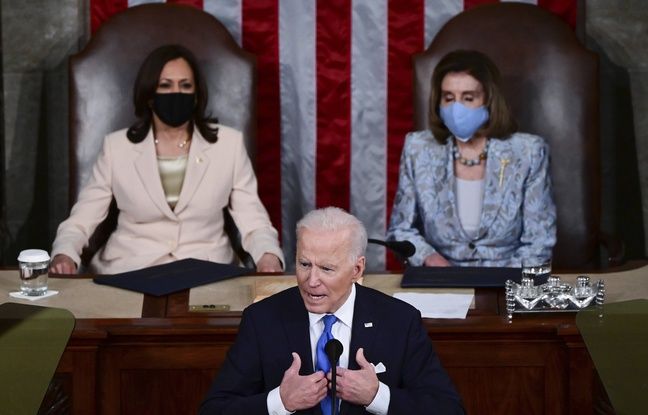 ” It was time. On the eve of his 100 days in the White House, Joe Biden began his address to Congress on Wednesday evening by welcoming a historic first: the presence of two women – House Speaker Nancy Pelosi and Vice President Kamala Harris – seated behind a chair, in view of cameras for over an hour.

“Madam Vice President,” President Biden says in introducing VP Harris during his address to a joint session of Congress. “No president has ever said those words from this podium — no president — and it’s about time.” pic.twitter.com/6ePTZ4Wjeh

Faced with a sparse and masked assembly, Covid-19 obliges, Joe Biden spoke from a desk stormed by rioters on the Capitol on January 6. He assured him, after having inherited “from a country in crisis”, America “is moving forward again”, with more than half of adults having received at least one dose of the vaccine. But while he has set an ambitious and progressive course, arguing for massive spending on infrastructure, education and the middle class, and demanding immigration and police reforms, Joe Biden has failed to appear convincing. the Republicans. Ted Cruz, who dozed off during the presidential speech, denounced after the fact a “socialist and radical” program. Conversely, Bernie Sanders strongly applauded Biden’s calls for a minimum wage of $ 15 an hour and in favor of a law protecting unions.

Tax hikes for the rich who get stuck

Joe Biden has asked Congress for more than $ 2,000 billion to renovate America’s crumbling infrastructure, but also to respond to the challenge of climate change. On Thursday, he added 1,800 billion in spending for the middle class, mainly on education, with the ambition to propose community colleges (universities offering a two-year diploma) free, as well as a universal nursery school from 3 years old and not 5.

To finance all this, Joe Biden is banking on corporate tax increases and for Americans earning more than $ 400,000 a year. “It is time for the richest 1% and the multinationals to pay their fair share,” Biden insisted, recalling that he simply wanted to go back to pre-George W. Bush levels.

Problem, Democrats only have 50 out of 100 seats in the Senate, with Kamala Harris to tip the scales. And to avoid fatal parliamentary obstruction, it takes a qualified majority of 60 senators to approve a bill. There is a back door to force a 50-vote push for anything impacting the budget, but it’s only possible once a year – and maybe two after a parliamentary decision in early April. Democrats, who have already used a cartridge to respond to Covid-19 with the gigantic stimulus plan adopted in March, will have to make choices. And not to rob some in their own camp, like the centrist Joe Manchin, who declared himself against a minimum wage of 15 dollars.

Wishful thinking on immigration and weapons

Faced with the epidemic of gun violence, Joe Biden called on elected officials to reform to strengthen background checks (background check) and ban semi-automatic weapons as was done under Bill Clinton. He also wants to sign an overhaul of the immigration system and open the voice to a gradual legalization of undocumented migrants, starting with young people. dreamers, arrived children illegally. Finally, for the anniversary of George Floyd’s death on May 25, Joe Biden hopes to sign a law to reform the police and the use of force.

On immigration, all of his recent predecessors have broken their teeth. And like Barack Obama, Joe Biden is unlikely to be successful in convincing Republicans to move on guns, with conservative voters staunchly attached to the 2nd Amendment. On the police, on the other hand, “there is hope with negotiations between Republican Tim Scott and Democrats,” said Doug Heye, former spokesman for the Republican Party. It was Scott who was responsible for responding to Joe Biden’s speech. It will undoubtedly not be as ambitious as what the American president claims. But these days, a compromise would already be a victory.