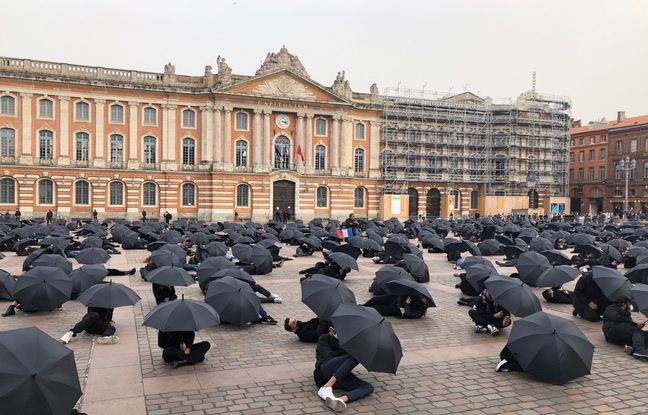 They are hairdressers, restaurateurs or even event producers, hit hard by the coronavirus crisis. This Friday, all dressed in black, they had made an appointment at Place du Capitole, in Toulouse, to demonstrate. Which is not really in their habits. But this time, their employers’ unions had called on them to participate in this protest mobilization of “non-essential” businesses, simulating the death of their business.

“Today, we are at 10% of our traditional activity, over the year we recorded a drop in turnover of 95%. Our outlook is the hope of finding an activity again in June, that people want to organize things again ”, notes Michel Angely, who works in the events and travel agency A la Une. .

He also hopes that the government’s messages will change, “that we are considered as professionals who can organize things in complete safety, it is possible as soon as the confinement is lifted,” he says.

One meter from him, Gerome Cholley holds the Mas Tolosa, in Plaisance-du-Touch. Usually, during this period, the seminars are in full swing. But since March, he has not managed a major event, only a few smaller meetings. And it is impossible to fall back on private parties or weddings which are no longer allowed either.

“Last year in June, there were 70 events organized at the Mas, this year I had four. We are business leaders, we have to be optimistic. We say to ourselves, why not tests beforehand so that the event takes place in complete safety, because in the meantime, we all know, there are also clandestine evenings, ”he laments.

So, like other owners of SMEs, this Friday, he lent himself with good grace to a ceremony whose objective was to ask the State for “real support” and not just loans, “a right to die later ”.