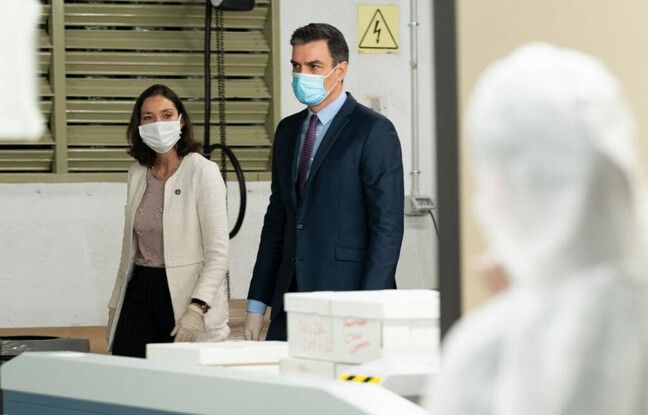 The Spanish Socialist Minister of Tourism Reyes Maroto received a letter containing “a bloody knife”, a few days after letters of death threats with bullets sent to several other personalities on the left, a senior socialist official said on Monday. These threats, in which the left sees the mark of the far right, come a little over a week before the regional elections on May 4 in Madrid, an election with strong national stakes.

“I have just been told that our comrade Reyes Maroto (…) has just received a bloody knife as a sign of threat,” said Adriana Lastra in the middle of a meeting for these regional. “Threats and violence will never silence the voice of democracy. Freedom will win, ”the Minister of Tourism exclaimed on Twitter, without specifically mentioning the nature of these threats.

Police are trying to determine if the red marks visible on the knife, according to the images broadcast by the media, are really blood. Socialist Prime Minister Pedro Sanchez “strongly condemned” these threats. ” Enough ! We’re not going to let this go. We are not going to accept that hatred takes hold of living together in Spain, ”he said on Twitter.

At the end of last week, the leader of the radical left party Podemos, Pablo Iglesias, the Minister of the Interior and the head of the Civil Guard had already received threatening letters, containing bullets. “It is me (which they are targeting, editor’s note) today, but if the impunity and media laundering of the ultra-right continues, tomorrow they will be other comrades,” said Pablo Iglesias, a former vice-president. President of the Government, posting on Twitter a photo of the letter and the four bullets of “Cetme”, an assault rifle used by the Spanish army between the 1960s and 1980s.

The threat of the Vox

These threats electrified the regional campaign, for which Mr. Iglesias is a candidate. On Friday, the latter left a radio debate when the candidate of the far-right party Vox expressed doubts about the authenticity of these threats. The refusal of left-wing candidates to debate again with Vox resulted in the cancellation of another debate scheduled for April 29 on public television.

During a meeting on Sunday, Pedro Sanchez tried to mobilize left-wing voters by brandishing the “threat” of Vox, at a time when the favorite of this poll, the current right-wing regional president Isabel Diaz Ayuso, might need support for this training to be reappointed.