A vote this Sunday for the niqab ban 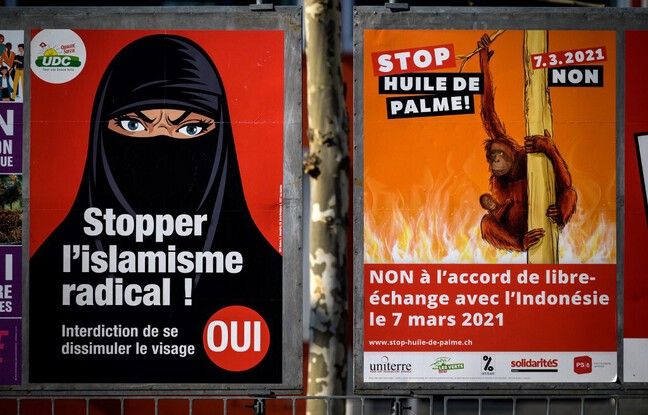 The Swiss must decide this Sunday whether or not to adopt the ban on concealing the face, a measure that targets the few women who wear the niqab in the Alpine country. If the yes were to win, Switzerland would join France, Austria, Bulgaria, Belgium and Denmark in banning the full veil. If the text does not evoke the burqa – a sort of long piece of fabric that covers women from head to toe and provided with a mesh slit at eye level – nor the niqab, which covers the entire body and face With the exception of the eyes, everyone understands who is being targeted.

If the yes were to win, then it will be forbidden to completely cover the face in public, but exceptions are provided for places of worship, for example. “In addition to being useless, this text is racist and sexist. We believe that in 2021, as feminists, it is not acceptable for the Swiss Constitution to have an article that prescribes or prohibits women’s clothing of any kind, ”said Ines El Shikh, spokesperson for the collective of Muslim feminists “The purple scarves”.

Defend “the values ​​of our civilization”

“The target of the initiative is not Muslims, we do not question their religious practices,” says Jean-Luc Addor, spokesperson for the yes party and member of the far-right UDC party. For him, it is about defending “the values ​​of our civilization”. The yes camp remains in the lead, but its initially comfortable lead in the polls has melted since January.

The federal government and parliament oppose this measure, arguing that the initiative addresses a problem that does not exist. Their counter-proposal – which would be immediately adopted if the yes fails – would force people to show their faces as soon as the authorities require it for identification purposes, at borders for example. Fines of up to 10,000 Swiss francs (just over 9,000 euros) can be imposed on offenders.

A question about a trade agreement

The population must also vote on two other subjects including, for the first time, a trade agreement, in this case with Indonesia. It is palm oil – with a sulphurous ecological reputation – which is the focus of the debate. This agreement provides in particular for the abolition of customs duties on a large part of the products traded. Opponents criticize deforestation, violations of human rights and the environment, but also the criteria for the certification of palm oil themselves, contained in the agreement. A poll in February gave a clear advantage to the adoption of the text (at 52% against 42%).

The last referendum concerns the adoption of an electronic identity approved by the federal state which would facilitate and secure many online procedures. It would be granted on a voluntary basis to a company approved by the Federal State. And this is where the shoe pinches for opponents who worry about giving private companies access to sensitive information. The results are expected in the afternoon, with the polling stations all closing at 12:00 p.m. The vast majority of Swiss people vote in advance.