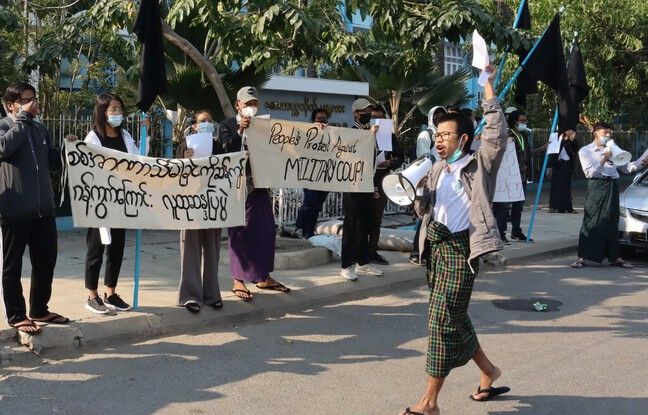 Three days after the coup that overthrew the civilian government of Aung San Suu Kyi, access to the Facebook social network, widely used in Burma for communication, was disrupted on Thursday. On Monday, the military abruptly ended the country’s fragile democratic transition, arresting Aung San Suu Kyi and other officials from his party, the National League for Democracy (LND). The state of emergency was established for one year.

The 75-year-old leader, who is reportedly under house arrest in the capital Naypyidaw according to her movement, has been charged with breaking an obscure trade rule. The fear of reprisals remains strong in the country which has lived, since its independence in 1948, under the yoke of the military dictatorship for almost 50 years. But the signs of resistance against the putsch, strongly condemned by the UN which calls on the international community to come together to make it fail, continued to emerge.

On Wednesday evening, in the commercial district of Yangon, the economic capital, residents honked their horns and banged on pots and pans for the second evening in a row, some chanting: “Long live Mother Suu! (Aung San Suu Kyi). Health professionals took the lead in the protest, several dozen establishments across the country refusing to work “under illegitimate military authority”. Some protested by wearing red ribbons in the colors of the NLD, others making the three-fingered salute, a gesture of resistance already adopted by pro-democracy activists in Hong Kong or Thailand.

Groups calling for “civil disobedience” have also been created on Facebook, the gateway to the Internet for a large part of the population. The American firm said Thursday that some of its services were “disrupted”. “We urge the authorities to restore the connection so that residents can communicate with their families and friends and access important information,” said a spokeswoman for the platform.

Norwegian company Telnor, one of the country’s main telecommunications providers, has confirmed that authorities have issued an order to “temporarily block” Facebook. We were forced to cut but “we do not think that this measure (…) is” in conformity with international law “, added the company. The military authorities have already issued a warning advising the population not to say or publish anything that could “encourage riots or an unstable situation”.

The head of the Burmese army, Min Aung Hlaing, who now concentrates most of the powers, justified his putsch by evoking massive frauds during the legislative elections of November won massively by the LND, an election which however took place without major problem, according to international observers. In reality, the generals feared that, despite a constitution which is very favorable to them, their influence would diminish after the victory of Aung San Suu Kyi, adulated in his country, analysts say.

Min Aung Hlaing, an international outcast since the Rohingya crisis, also overthrew the leader out of personal political ambition when he was close to retirement, they said. The 1991 Nobel Peace Prize winner was indicted for breaking a Burmese import and export law, NLD said, after authorities found unregistered walkie-talkies in her home. An equally obscure charge has been put forward for ex-President Win Myint, who was prosecuted for violating a country’s disaster management law by failing to comply with anti-coronavirus measures.

What contracts are dedicated to the hiring of disabled workers?

Anne Hidalgo’s anti-car policy, an obstacle on her road to the Elysee?