Accused of “illegitimate” use of power, Netanyahu’s trial resumes 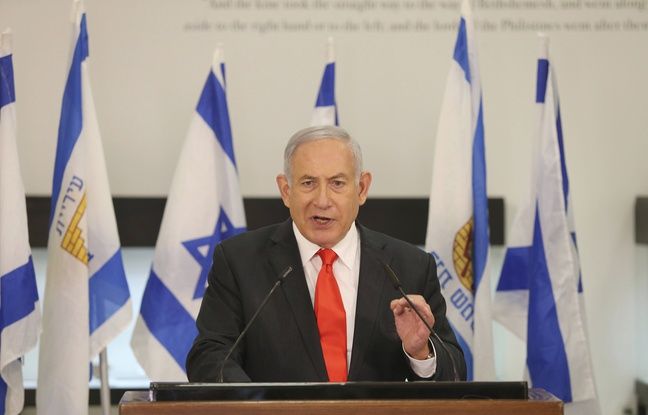 Israeli Prime Minister Benjamin Netanyahu has used his power “illegitimately,” the prosecutor said on Monday when the head of government’s corruption trial resumed, just as post-election consultations that are crucial for his political future begin.

The first head of government in Israel’s history to face criminal charges while in office, Benjamin Netanyahu is accused of corruption, fraud and breach of trust in three cases, charges he firmly denies.

“To advance your personal affairs”

He is accused of having used illegitimately his governmental power “among other things to seek and obtain unjustified advantages from owners of important media in Israel, to advance his personal affairs, especially when he wanted to be re-elected”, detailed Senior Prosecutor Liat Ben-Ari.

Benjamin Netanyahu, 71, of whom 15 are in power, left the Jerusalem district court after opening statements by the prosecution, before hearing the first witnesses.

“Liar”, “We watch over democracy”, could we read around the court on signs of demonstrators, who have been demanding for months his resignation by meeting in front of his residence every Saturday. Dozens of supporters of the prime minister, the most enduring in Israel’s history, were also gathered outside the tribunal.

Netanyahu in a bad political position

While lead prosecutor Liat Ben-Ari was developing her point, President Reuven Rivlin began two-day discussions with party officials a few kilometers away to nominate a candidate to form a government.

Benjamin Netanyahu’s right-wing Likud led the March 23 legislative elections – the fourth in less than two years – with 30 out of 120 seats in the Knesset. But this result, combined with that of his natural allies, does not assure him the majority of 61 seats to form a stable government. And in front of him, many formations are decided to put an end to his twelve consecutive years of reign.

For lack of a common leader in this camp, Benjamin Netanyahu could obtain the most recommendations, with the support of 16 deputies from the ultra-Orthodox Shass and “Unified Judaism of Torah” parties and six from the far-right alliance “Religious Zionism” “. Usually, the candidate with the most recommendations is nominated and has 28 days to form a government, which can be extended by 14 days.

But Reuven Rivlin hinted last week that seat calculations might not be the only determining factor and that he would nominate a candidate on Wednesday who can form a government that “will heal divisions … and rebuild society. “.

Given the acrimony that has reigned in the past between Benjamin Netanyahu and Reuven Rivlin, Likud has interpreted these statements as a sign of tacit support for the anti-Bibi camp, the nickname given to the prime minister. A member of Likud when he was a deputy, Reuven Rivlin was accused by the party of overstepping his duties, especially honorary ones. “Unusual coalitions” may be needed to break the deadlock, added the president.

In the bloc opposed to the Prime Minister, the centrist Yaïr Lapid leads the dance with 17 seats for his Yesh Atid party. But forming an anti-Netanyahu coalition would require an unlikely alliance between Yair Lapid, Gideon Saar, former conservative minister of Benjamin Netanyahu, Naftali Bennett, leader of the radical right and former ally of the prime minister, and other parties. center and left.

Surprised by the ballot, the formation of a government appears impossible on both sides without final support: that of the Islamist party Raam de Mansour Abbas having won four seats and open to discussions with both camps. But the “religious Zionism” party has already ruled out participating in a government alongside Raam, complicating the outgoing Prime Minister’s task.

If neither side manages to form a coalition, new elections could be called, prolonging the crisis. For the time being, Benjamin Netanyahu’s trial does not threaten his ambitions since he would only have to resign in the event of a final conviction and the exhaustion of all remedies could take years.