After meeting Joe Biden, his relatives call to “protect people of color” 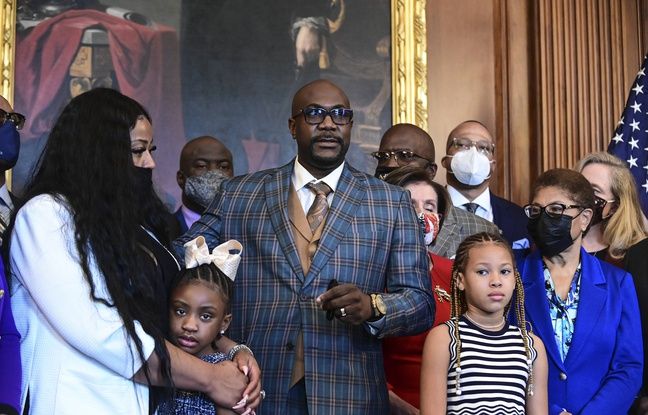 George Floyd’s family on Tuesday called on the US Congress to pass a sweeping law on police reform to “protect people of color” after meeting Joe Biden at the White House. The latter praised the “extraordinary courage” of the Floyd family.

Killed on May 25, 2020 in Minneapolis during his arrest by four police officers, the African-American forty-something George Floyd has become a symbol in the United States and beyond. His agony provoked an unprecedented mobilization, his plea “I can no longer breathe” turned into a rallying cry against the abuses of the police.

Justice moves forward: Derek Chauvin, who knelt on his neck, maintaining his pressure for nearly ten minutes, was convicted of murder. His sentence will be announced on June 25.

George Floyd will “change the world”

But members of the Floyd family, who have become the spokespersons for this struggle, are hammering the lines must move deeply, pressuring Congress to pass a sweeping police reform bill named after him. .

George Floyd will “change the world,” said Gianna Floyd, during a meeting with Democratic Speaker of the House of Representatives, Nancy Pelosi.

“They are determined that something will happen,” commented the Speaker of the House of Representatives. “We will work until the job is done, it will be done by consensus” with the Republicans, said Democratic parliamentarian Karen Bass.

A law still under debate in the Senate

On the legislative front, things are moving slowly. During his first major speech to Congress at the end of April, Joe Biden called on elected officials to adopt the “George Floyd Justice in Policing Act” by the first anniversary of his death. But it is still under debate in the Senate.

The text voted by the House of Representatives provides in particular for the prohibition of strangulation and aims to limit the broad immunity (“qualified immunity”) enjoyed by American police officers. This modification is the hard point of the negotiations, the Republicans posing as defenders of the legal protections of the police.

“The timetable for the passage of the law will not be kept,” admitted Jen Psaki, while stressing that Joe Biden welcomed the progress underway. “Our nation is awakening to the reality that black Americans live daily, changing this reality is not an impossible task,” for his part assured Democratic Senator Cory Booker.

If there is not yet a “big night” at the federal level, the states and cities are moving forward. Some localities are attempting experiments to reduce the risk of burrs, for example by disarming the officers in charge of road safety.

In Minneapolis, the tension remained high Tuesday morning. Twenty shots were fired near the crossroads where George Floyd died, which has become a place of memory, according to an AFP photographer.