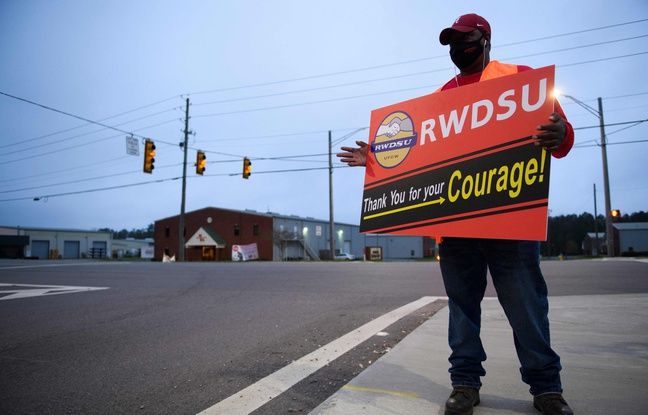 The vote for or against the creation of a union in an Amazon warehouse in Alabama, which would be the first in the United States, ends on Monday after more than five months of a David-style campaign against Goliath, already considered historic regardless of the verdict of the ballot box.

“We are exhausted. Our personal relationships are on the brink of disaster. But I am proud of the team and the workers at Amazon who have come together, ”says Joshua Brewer, local president of RWDSU, the distribution union that will represent the 5,800 employees at the Bessemer site, if they vote in its favor. favor. “Amazon’s worst fear has already happened: 3,000 employees said they could not work in these conditions,” he continues for AFP.

Since last fall, members of the union have taken turns day and night at the entrance of the huge brand new complex, to collect enough agreements in principle (they have had 3,000), then to convince them to transform the test. The counting of the votes is due to begin on Tuesday.

“We want to be treated with respect and dignity,” summarizes Jennifer Bates, one of the employees involved in the movement. “It means safe working conditions, job security, and wages to match.” When she was hired, Lafonda Townsend, another employee, was “happy with the salary”. “But that was before I saw how hard it is. The break room is very far away, and you have to eat like a prisoner, super fast, to be back on time, because if you are a minute late, you will be counted an unpaid hour ”.

The e-commerce giant hired hard in 2020, and almost doubled its net profit to $ 21 billion, thanks to the explosion in demand during a pandemic. But the second largest American employer (800,000 employees) finds itself embroiled in a bitter communication struggle.

Its spokespersons recently attacked on Twitter elected officials who support the union. They also denied the problem of workers forced to urinate in plastic bottles for lack of time to go to the toilet, contrary to comments and photos reported by various media. There, the group employs all manner of deterrence tactics, from texts touting the benefits to posters in the washrooms.

According to employees, in “briefings” Amazon waved the scarecrow of high union dues (nearly $ 500 a year) and insisted on current earnings of at least $ 15 per hour, more than double the amount. minimum wage in this poor state.

But Joshua Brewer notes that “other warehouses in the area pay $ 18-20 an hour.” For this former pastor and many observers, it is less about finances than exercising absolute control.

Amazon, however, does not only have critics in Bessemer. His arrival a year ago has been hailed as a factor of attractiveness and “the most significant investment in the history of the city” by its mayor Kenneth Gulley. “If all this negativity and horrible stories were true, that would mean there are 5,800 idiots working in the building industry.” But I don’t work with any idiot, and I’m not an idiot, ”Dawn Hoag, a 43-year-old warehouse quality manager, told AFP.

She considers that her colleagues do not need representatives to be heard and shows her pride at having lost about fifty kilos, in particular thanks to the kilometers covered on foot every day on the site. Darryl Richardson, the employee behind the movement, has also lost weight in recent months, but due to fatigue and stress. “My body is not going to hold (at this rate),” said the 51-year-old African-American. “I am asked why I am not looking for another job? Easier said than done ! I am too old, I do not present well. It is time to fight ”.