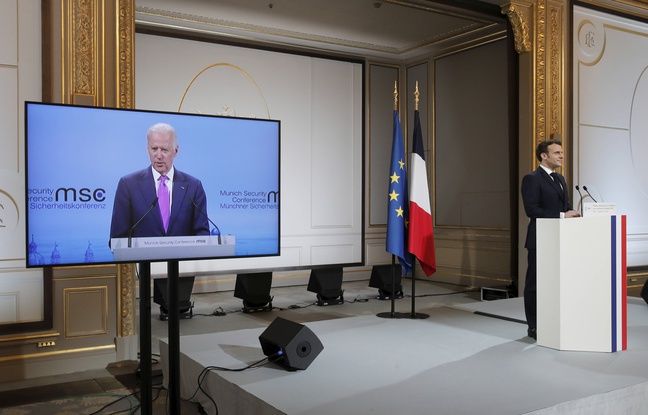 Isolationism is over. Joe Biden on Friday affirmed his commitment to the transatlantic alliance, accusing Moscow of “attacking” Western democracies in his first major foreign policy speech to its European partners. Angela Merkel, for her part, welcomed “reinforced multilateralism” at the end of the virtual G7 summit, the first in the presence of the new American president.

Breaking with his predecessor Donald Trump, Joe Biden promised as soon as he came to power America’s “return” on the international scene. Anxious to restore transatlantic relations, he took part in the G7 on Friday and then, by videoconference alongside the German Chancellor and Emmanuel Macron, in the Munich Conference, an annual meeting bringing together heads of state, diplomats and security specialists.

“I speak to you today as President of the United States, at the very beginning of my administration, and I send a clear message to the world: America is back. The transatlantic alliance is back, ”said the 46th President of the United States from the White House. The Democrat on the other hand reaffirmed his commitment to the fight against climate change, a “world existential crisis”, and called for the fight against “China’s economic abuses”.

NATO Secretary General Jens Stoltenberg echoed his concerns over Beijing’s role: “China’s rise is a critical issue for the transatlantic community, with potential consequences for our security, prosperity and way of life ”, he warned in his speech at the Munich Conference.

The United States must respond to Iran’s “destabilizing activities” in the Middle East, Joe Biden also said, without detailing them. The US president confirmed in the same speech Washington’s desire to relaunch the 2015 Iran nuclear agreement by involving all the signatory countries, including Iran.

Need for a “strong” EU

Addressing the European partners who were sometimes mistreated by the United States under Donald Trump, his successor accused Russia of “attacking our democracies” and said he was determined to “regain” the confidence of Europe. Russian President Vladimir “Putin seeks to weaken the European project and our NATO alliance”, he accused. “He wants to sabotage transatlantic unity and our resolve, because it is much easier for the Kremlin to intimidate and threaten states alone than to negotiate with a strong and united transatlantic community,” he said. added. “In far too many places, including in Europe and the United States, the advance of democracy is under attack,” warned the former vice-president of Barack Obama. “We are at a crucial moment”.

Faced with the advance of populism, “we absolutely must demonstrate that our democracies can still benefit our peoples”, he insisted. This proclaimed “return” of America to the heart of international alliances was well received by Angela Merkel. “Multilateralism will again have more chances within the G7,” said at a press conference following this summit of the seven great powers.