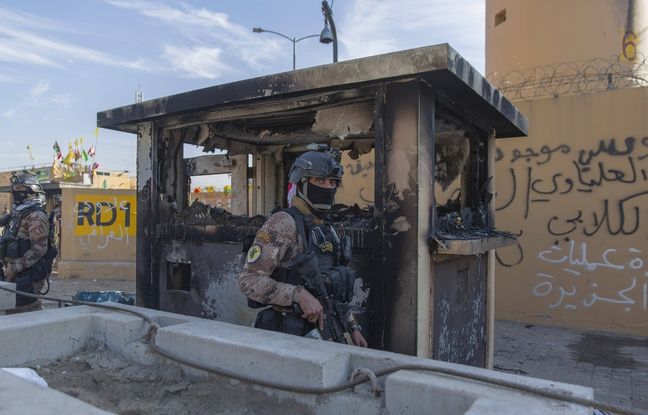 The Americans shot down a drone bomb that targeted their embassy in Baghdad on Monday evening, security sources said, hours after another rocket attack on a base housing American soldiers in western Iraq. On the night of Monday to Tuesday, the US C-RAM defense systems went into action, firing salvos, journalists noted, Iraqi security sources claiming that they had intercepted the flying device, a new technique privileged attack of Iranian backers in the Middle East.

Since the start of the year, 47 attacks have targeted United States interests in the country, where 2,500 American soldiers are deployed as part of an international coalition to fight against the jihadist group Islamic State. Six of them were carried out using trapped drones, an attack technique inaugurated in mid-April in Iraq which is a headache for the coalition because these flying devices can escape the C-RAM defense batteries, installed by the US military to defend its troops.

None of these attacks have been claimed, but their modus operandi bears the signature of pro-Iran who, in Yemen for example, use drones trapped against the Saudis. The Hachd al-Chaabi, a coalition of pro-Iran paramilitaries integrated into the regular forces and now an essential force in the country, regularly welcomes the launching of rockets and other drone bombs targeting American installations in Iraq, but never claims responsibility for them.

Earlier in the day on Monday, three rockets targeted an Iraqi air base in the desert west housing American soldiers, the international anti-jihadist coalition said. The attack targeted the Ain al-Assad base without causing any casualties.

The new attacks come a week after US strikes against Hashd positions in Syria and Iraq, which killed a dozen fighters. As a sign that the United States is worried about new drone attacks, it recently announced that it was offering up to $ 3 million for information on attacks targeting its interests in Iraq.