An expert defends Derek Chauvin then gets annihilated by the prosecutor 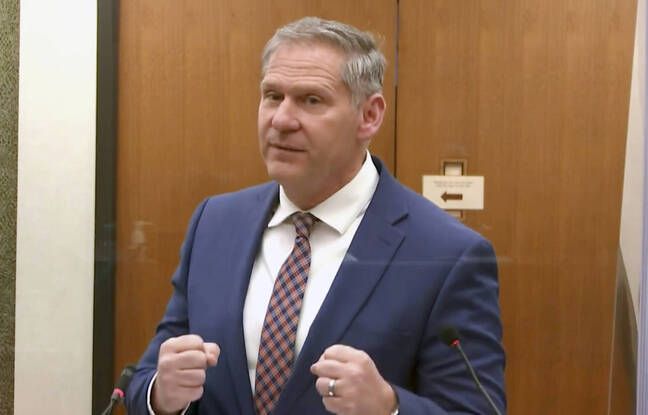 Did Derek Chauvin use “reasonable and justified” force by kneeling on George Floyd’s neck to immobilize him? This is one of the central questions in the trial of the ex-policeman, tried for murder in court in Minneapolis. On Tuesday, the defense was able, for the first time, to call witnesses to the stand. And if an expert defended the actions of Chauvin, deeming them “reasonable and consistent with his training”, the ex-instructor had a very bad time facing the incisive questions of the prosecutor and the videos of the arrest.

Last week, a half-dozen witnesses, including the Minneapolis Police Chief, Derek Chauvin’s superior and several experts, all believed that the accused had used “excessive” force, and that for nearly 10 minutes on George Floyd’s neck was “absolutely unnecessary”, while he was unarmed and handcuffed. But at the stand, Barry Brodd, a former Californian police officer with 30 years of experience including half a dozen as an instructor, said the exact opposite.

“In my opinion, Mr. Chauvin’s interaction with Mr. Floyd was in accordance with his training and current law enforcement methods, and it was objectively reasonable,” he assured the 12 jurors, answering questions. from Derek Chauvin’s lawyer, Eric Nelson. And to insist: “Anyone who resists, handcuffed or not, must be put on the ground. “It is at this moment that he pronounces a sentence which he will regret a few minutes later, concluding:” Once on the ground, the maintenance of the prone control (lying on your stomach) is not a use of force. It is a technique of control. It doesn’t hurt. “

“Okay, in this photo, it could be considered a use of force”

Steve Schleicher, a lawyer on the district attorney’s team, isn’t asking too much. Cleverly, he reverses the premise, “Suppose Mr. Floyd felt pain, would that change your opinion?” Would this constitute a use of force? The witness hesitates. “If the pain was inflicted through the prone control, so yes, ”he replies. For nearly 45 minutes, the prosecutor then shows the jury the agony of George Floyd from all angles.

– Colleague: Shall we roll it on its side?
– Chauvin: No, leave it
– Colleague: I think he’s fainting
– Proc: Mr. Floyd didn’t resist anymore, was he?
– Expert: Non
– And the accused stayed on him in the street, didn’t he?
– Yes
– I have nothing further
5/5 #ChauvinTrial pic.twitter.com/H5OElYVBuB

Faced with the annotated stills, the expert is forced to admit it: the left knee of Derek Chauvin is well, most of the time, “on the neck” of George Floyd, and the right “on his back”, unlike what he wrote in his report. “And do you think that pressing someone against the pavement with both knees is not likely to inflict pain?” », Asks the prosecutor. “It could”, answers the expert. “And if so, that would be a use of force, according to your hypothesis, right?” Schleicher shows him the photo that has toured the planet, that of George Floyd’s face pressed against the tar, his mouth open, Derek Chauvin staring at passers-by. Barry Brodd capitulates: “Okay, in this photo it could be considered a use of force. “

The prosecutor continues. In another video, George Floyd shouts “My stomach hurts, my neck hurts all over”. The witness admitted that he heard it but “not noted” it in his report. Each time, Derek Chauvin responds with “uh-huh” (close to “yes”). A sign, insists the prosecutor, that he heard the cries of course.

After more than 4 minutes of immobilization, the howls of George Floyd are more and more weak. “We roll it on its side” in a safe position ?, suggests Officer Lane, alongside Derek Chauvin. “No, leave it like that”, replies the latter. A minute later, a passerby, a firefighter who begged the police to let her come to the aid of George Floyd, shouts: “He is unconscious”. What we had not heard, however, is that at the same time, Officer Lane also exclaims “I think he is passing out”. The prosecutor is going crescendo. He hammers out his every word as he drums his finger on his desk: “And the position of the accused was, and continued as seen here, at this moment, in this video, on Mr. Floyd, against the pavement, n ‘is this not ? »« Yes », loose the witness. Steve Schleicher is done. “ No further questions. »