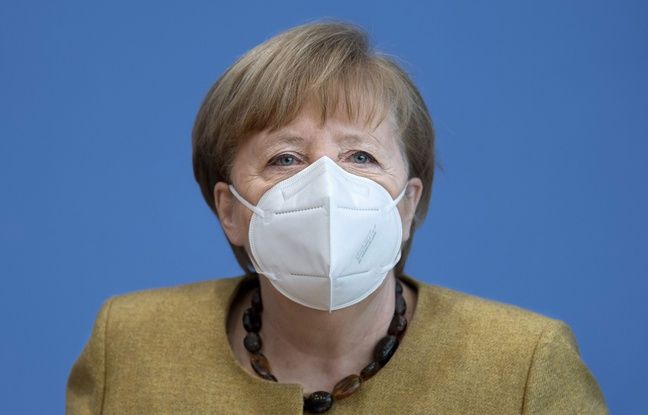 The growing discontent of German opinion did not really bend the executive. In its fight against the coronavirus, Berlin has made only a few minimal concessions to its people. Angela Merkel announced on Wednesday evening the extension until March 7 of most of the restrictions against Covid-19 in place in Germany.

Non-food businesses, restaurants, cafes, museums or even sports facilities will thus remain closed beyond the date fixed so far of February 14, “given the uncertainty concerning the spread of variants of the virus”, explained the Chancellor. , following a meeting with representatives of the country’s 16 regional states. She nevertheless indicated that hairdressing salons will be able to reopen on March 1, provided that a strict sanitary protocol is adopted, and that schools could do the same where local conditions allow.

Welcoming that the infection figures in recent weeks “are improving”, Angela Merkel justified the extension of the restrictions, some of which were put in place as early as November, due to the recent spread of the South African and British variants, considered more contagious.

The Chancellor, however, considered that the relative improvement in the figures recently “shows that the measures imposed here, often very strict and very harsh, are now bearing fruit”. In recent days, Germany has recorded an average of around 8,000 new Covid-19 infections per day. “But we want to avoid a third wave” and this can only be done “if all contact cases can be traced”.

Pressure from the Länder

During the negotiations Wednesday with the regional states, the Chancellor played tight. The degree of acceptance of the restrictions by the population has indeed fallen to 50% from 65% in early January, according to a YouGov survey this week. But after more than five hours of negotiations, Angela Merkel, who pleads for firmness to fight the virus, has managed to impose her line.

To achieve her ends, she nevertheless had to make concessions: she initially wanted an extension until March 14 and not only until March 7. And she wanted to wait until March to offer schools the possibility of reopening. On these two points, it had to give in to pressure from the regions, the Länder, which have the upper hand over health and educational issues.

Between jet lag and offerings on the ground, Bruno Guimaraes lived a “magical” evening