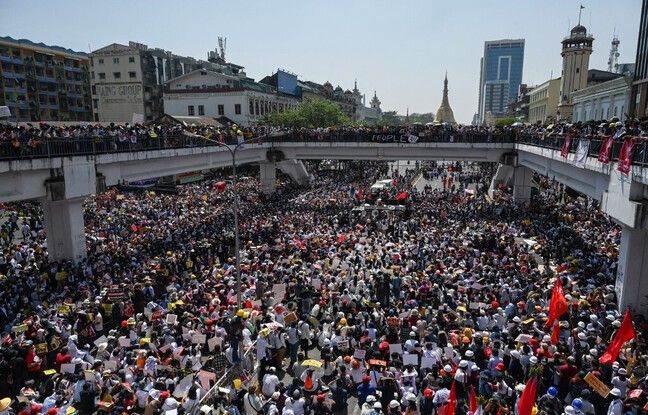 The anti-junta mobilization continues this Wednesday in Burma with large crowds in the streets despite the fear of an escalation of violence. Tens of thousands of protesters gathered near the famous Sule Pagoda in downtown Yangon, responding to the call for a mass protest on Wednesday to urge the junta to return power and demand the release of Aung San Suu Kyi.

In an attempt to prevent the security forces from deploying, protesters blocked several axes with cars and trucks, claiming they had broken down. For the moment, no significant presence of military and armored vehicles was visible. But United Nations rapporteur Tom Andrews fears renewed violence after being informed of the dispatch of soldiers “from peripheral regions to Yangon”. “In the past, such troop movements preceded large-scale murders, disappearances and detentions,” Tom Andrews warned, saying he was “terrified”.

Escalation since February 1 and the coup

Prohibition of gatherings, Internet cuts, night arrests, strengthening of the legislative arsenal: the military has continued to toughen its tone since their coup d’état of February 1, which ended a fragile democratic transition of ten years. Several protests have already given rise to strong tensions in recent days. The police fired on several occasions, tear gas, rubber bullets or with slingshots, injuring several people. A 20-year-old woman who was shot in the head last week – probably with live ammunition – is brain dead.

Despite this, calls for civil disobedience continue with doctors, teachers, air traffic controllers and railway workers on strike against the putsch. These strikers are particularly targeted during arrests. More than 450 people – politicians, officials, activists, students – have been arrested since February 1, according to an NGO helping political prisoners. 417 are still in detention. Unconfirmed reports point to additional arrests.

Already prosecuted for breaking an obscure trade rule by importing walkie-talkies “illegally”, Aung San Suu Kyi, 75, faces a new charge for violating “the law on the management of natural disasters”, according to her lawyer who still has not been able to contact her. She is “in good health” according to the junta, which ensures that she is kept under house arrest for her safety. Internet connections were again almost completely cut off overnight from Tuesday to Wednesday, before being restored in the morning.

Junta leader Min Aung Hlaing justified his coup by citing fraud in the November legislative elections, largely won by Aung San Suu Kyi’s party (the National League for Democracy). He promised new elections at the end of the year-long state of emergency. Min Aung Hlaing has been an international pariah since the atrocities committed against Rohingya Muslims in 2017.