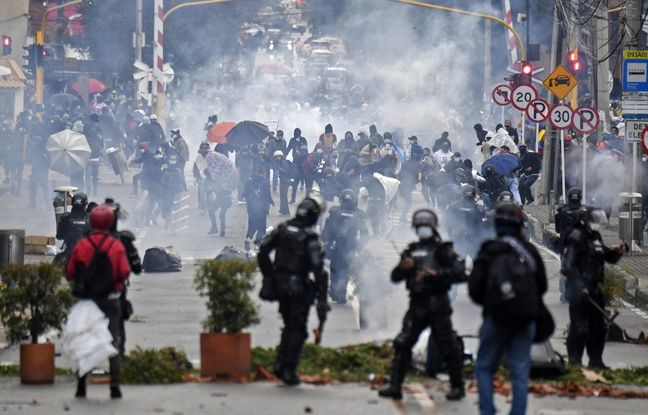 At least 17 people have died and more than 800 others have been injured in Colombia in violence in five days of protests against a right-wing government’s tax reform plan, authorities said on Monday.

According to a report by the People’s Defender, a public body for the protection of human rights, 16 civilians and a police officer died during these demonstrations which began on April 28. The Defense Ministry reported 846 wounded, including 306 civilians.

In addition, 431 people were arrested during the unrest in some of the mostly peaceful protests, and the government ordered the deployment of the army to the most affected towns. Several NGOs accused the police of shooting civilians.

Defense Minister Diego Molano asserted that the violent incidents were “premeditated, organized and financed by dissident groups of the Farc”, which rejected the peace agreement signed in 2016 by the ex-Marxist guerrillas, as well. only by the National Liberation Army (ELN), considered the last rebellion in Colombia.

“A tax reform (which) further impoverishes the people”

Tens of thousands of Colombians have been demonstrating in recent days to demand the withdrawal of a tax reform project, presented by the government in the midst of a pandemic and accused of mainly affecting the middle class.

As Colombia is rocked by a third wave of Covid-19, protesters descended in Bogota, but also in Medellin (northwest), Cali (southwest), Barranquilla (north) and Neiva (center), as well than in other cities of the country.

“It’s incredible, we are in the midst of a crisis” and the government decides “to conduct a tax reform (which) further impoverishes the people,” lamented Julian Naranjo, an environmental official, during the demonstration in Bogota.

Under the pressure of the demonstrations, massive on Wednesday and which were repeated in the following days with a varying scale according to the cities, the conservative president Ivan Duque announced Sunday evening the withdrawal of the tax reform, under consideration in the parliament. This project has aroused strong criticism, the opposition, as well as the organizing unions of the April 28 mobilization and even representatives of the ruling party believing that it affected the middle class too much and deeming it inopportune in the midst of the Covid pandemic. 19, which worsened the economic crisis.

Despite the announced withdrawal, demonstrators again took to the streets of Bogota on Monday morning, blocking traffic on some avenues.

The government presented to parliament on April 15 its tax reform project aimed at increasing state revenues by the equivalent of an additional $ 6.3 billion between 2022 and 2031, to finance public spending in the fourth economy. ‘Latin America.

The worst economic crisis in half a century

Colombia faces its worst economic crisis in half a century, with gross domestic product (GDP) falling 6.8% in 2020 and official unemployment of 16.8% in March. While nearly half of the working population in this country of 50 million people live in the informal economy, poverty has worsened to 42.5%.

Ivan Duque proposed to withdraw his initial project to draft a new text, removing the main contested points: the increase in VAT on goods and services, as well as the broadening of the income tax base.