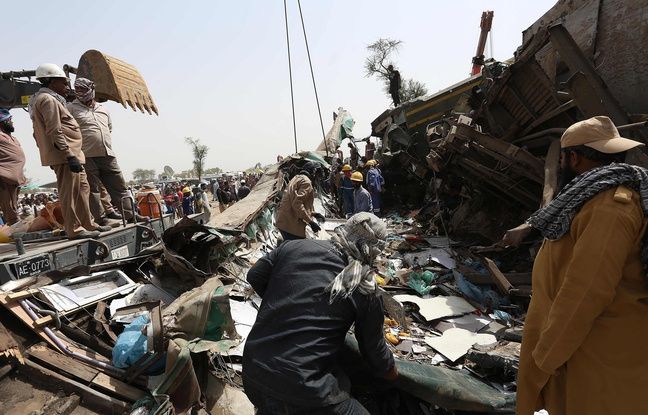 At least 43 people have been killed and dozens injured in a derailment followed by a collision with another passenger train on Monday morning in southern Pakistan.

Rescue workers took hours to free some of the passengers trapped in the tangle of twisted and shredded metal formed by wrecked trains near the town of Daharki in remote northern Sindh province, a door told AFP. – speech of Pakistan Railways. Operations continued into the night.

The double accident occurred around 3.30am local time, when most of the 1,200 passengers on the two trains were likely to be sleeping. The first train, the Millat Express, derailed before being struck by another train, the Sir Syed Express, arriving in the opposite direction, according to the spokesperson, who spoke of at least 33 dead.

The toll is likely to increase

“We fell on top of each other but nothing serious,” Akhtar Rajput, passenger of the derailed Millat Express, told AFP. “Then another train appeared out of nowhere, hit us and it shook us much more strongly. When I came to my senses, I saw passengers lying around me, others trying to get out of the car”.

The Millat Express was connecting the large port of Karachi with the town of Sardogha when it derailed, sliding on the tracks of the Sir Syed Express coming in from Rawalpindi in the opposite direction. According to the Minister of Information, Fawad Chaudry, the two accidents occurred within minutes of each other.

Daharki police official Umar Tufail said at least 43 people were killed and dozens more injured. He said he feared that the death toll would increase. Most of the dead were pulled from the first derailed train, according to local officials.

Images, broadcast by local television, showed doctors placing an IV on a man, conscious, whose only torso emerged from the metal clusters. The corpses were lined up on train benches and covered with traditional shawls.

“The site is out of the way and we are having difficulty in organizing rescue”, in particular to transport the appropriate equipment in order to clear at least six wagons destroyed in the accident, explained for his part the spokesperson for Pakistan Railways.

The chairman of the National Disaster Management Authority, General Akhtar Nawaz Satti, announced on the private ARY television channel that the army and paramilitary forces stationed at bases nearby had come to the aid of the casualties. Villagers also came in crowds to try to help the wounded, according to local media images.

The accident occurred in a remote area of ​​the province on a section of railroad tracks crossing farmland. Gul Mohammad, a paramedic dispatched by a private foundation, reached by phone by AFP, explained that poor communications in the area made it difficult to coordinate relief efforts.

According to Interior Minister Sheikh Rashid, former Minister of Railways, the tracks on which the accident occurred, which he described as a “mess”, dated back to 1880. The current Minister of Railways in iron, Azam Swati, said the section of railway where the accident took place was “really dangerous,” but added that authorities were waiting for funds from the massive “China-Pakistan Economic Corridor” infrastructure project to launch. the repairs. “If there is any delay (to receive the funds), we will rebuild this railroad with our own money,” he said.

Pakistani Prime Minister Imran Khan, who said he was “in shock”, promised a full investigation “into railway safety breaches” on his official Twitter account.

Rail accidents are unfortunately common in Pakistan, which inherited thousands of miles of track and trains from colonial times under the British Empire. Their maintenance has often been neglected over the decades.

In 1990, in Sindh province, a train collision killed more than 300 people and injured 700 others near the town of Sukkur when a crowded convoy of 16 cars crashed into a freight train. More recently, in October 2019, at least 75 people were killed in a fire on their train going from Karachi to Rawalpindi.