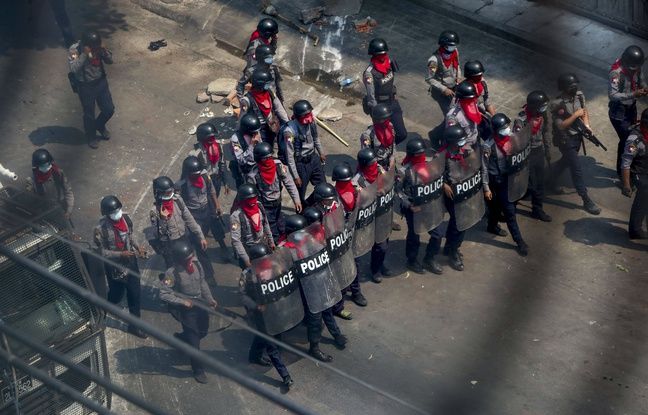 At least seven pro-democracy demonstrators were killed and several wounded this Wednesday in Burma by security forces who continue to fire live ammunition. Three men and a woman were shot dead during an anti-coup rally in central Monywa town, medical sources said. 130 kilometers away, in Mandalay, two protesters died after being shot in the head and chest, according to a doctor on condition of anonymity for fear of reprisals. In Myingyan (center), a 20-year-old man was killed and 17 people injured, according to rescuers.

Images posted on social media showed the young protester covered in blood being carried away from the barricades by his friends. On others, we heard a series of detonations, while protesters chanted: “Our revolt must succeed.” “The police fired tear gas, rubber ammunition and live ammunition”, according to a rescuer. Internet shutdowns, strengthening of the repressive arsenal, waves of arrests, use of lethal force: the junta has continued to intensify its repression since the coup d’état that overthrew the civilian government of Aung San Suu Kyi, February 1.

Despite this, protesters continue to take to the streets to demand the departure of the putschist generals and the release of the hundreds of detainees imprisoned in recent weeks. Because the repression also continues on the legal ground. The former President of the Republic, Win Myint, already indicted for not having respected restrictions linked to the coronavirus, is now accused of having violated the Constitution, said lawyer Khin Maung Zaw. Aung San Suu Kyi, still held incommunicado, is targeted by four counts, including “incitement to public disturbances”.

Six Burmese journalists, including Thein Zaw, a photographer for the American agency Associated Press (AP), have been charged. They are being prosecuted for “causing fear among the population, spreading false information (…) or inciting government employees to disobedience”, according to their lawyer. According to this text recently amended by the junta in an attempt to put an end to the campaign of civil disobedience launched in the hours following the coup, they face up to three years of detention.

Meanwhile, the military is still turning a deaf ear to international condemnation. The UK called for a new Security Council meeting on Friday. At the beginning of February, its 15 members issued a joint statement expressing their concern without, however, condemning the coup, with Beijing and Moscow, traditional allies of the Burmese army, opposing such a formulation. The last popular uprisings of 1988 and 2007 were bloodily suppressed by the military. The army, which is contesting the outcome of the November elections, which Aung San Suu Kyi’s party won overwhelmingly, has promised a new ballot.