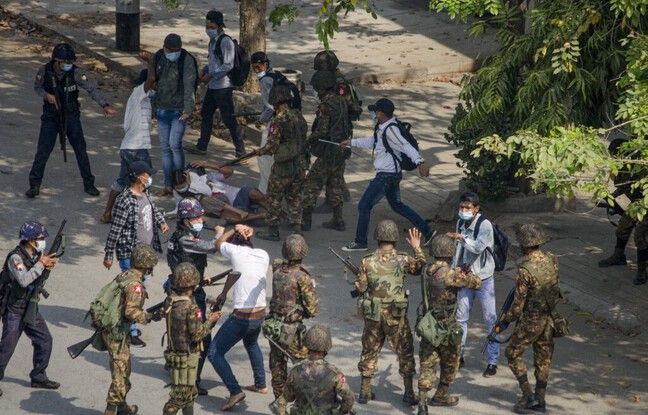 Since the putsch that toppled civilian leader Aung San Suu Kyi on February 1, the country has been rocked by a wave of pro-democracy protests and a campaign of civil disobedience. The authorities gradually increased the use of force to disperse them, with tear gas, water cannons, rubber bullets and sometimes live ammunition.

Sunday morning, the security forces were mobilized in numbers to quickly disperse the crowds that gathered in response to a call for new demonstrations. Three people were killed and around 20 others were injured when authorities intervened against a rally in the southern coastal town of Dawei, according to a health worker and local media. Pyae Zaw Hein, a rescue volunteer, said the three were “hit by live ammunition”, while the wounded were hit by rubber bullets. “There could be many more victims because we continue to receive wounded,” he added. Local media Dawei Watch also reported three deaths. There were previously at least five dead in the ranks of the demonstrators since the coup. The army says a police officer perished while trying to disperse a demonstration. In Yangon, the security forces also quickly dispersed a demonstration on Sunday. But it is not known whether live ammunition was fired.

“The police started shooting as soon as we arrived,” said Amy Kyaw, a 29-year-old schoolteacher. “There was not a word of warning. Some were injured and some are still hiding in houses in the neighborhood. Live social media broadcasts showed security forces using tear gas against crowds in Yangon as well as water cannons in the northern town of Mandalay. Already Saturday, the generally peaceful gatherings had been greeted very firmly by the authorities. At least three journalists were arrested, including a photographer from the American agency Associated Press as well as a videographer and a photographer from two Burmese agencies, Myanmar Now and Myanmar Pressphoto respectively. More than 850 people have been arrested, charged or sentenced for their involvement in the protests, according to an NGO helping political prisoners (AAPP).

But that figure is expected to explode at the end of the weekend, with official media reporting 479 arrests for Saturday alone. This repression has been condemned by many foreign capitals. The United States and the European Union in particular denounced the violence used by the security forces and asked the junta to withdraw. Aung San Suu Kyi, 1991 Nobel Peace Prize winner, has not been seen in public since his arrest. Under house arrest in the capital Naypyidaw, she was charged with illegally importing walkie-talkies and then violating coronavirus restrictions, charges for which she is due to appear on Monday.

Despite several requests, his lawyer Khin Maung Zaw was not allowed to see his client. “As a lawyer, I have every confidence in the court and in the principle of a fair trial,” he said. “But in this time, anything can happen. The junta on Saturday dismissed its ambassador to the United Nations, Kyaw Moe Tun, in the aftermath of its spectacular break with military power which intensified the repression of demonstrators in the country. “We need the strongest action of the international community to immediately end the military coup, end the oppression of the innocent people and restore state power to the people,” Kyaw said. Moe Tun at a special General Assembly session on Burma. UN spokesman Stephane Dujarric said the organization had not been formally informed of the diplomat’s dismissal.