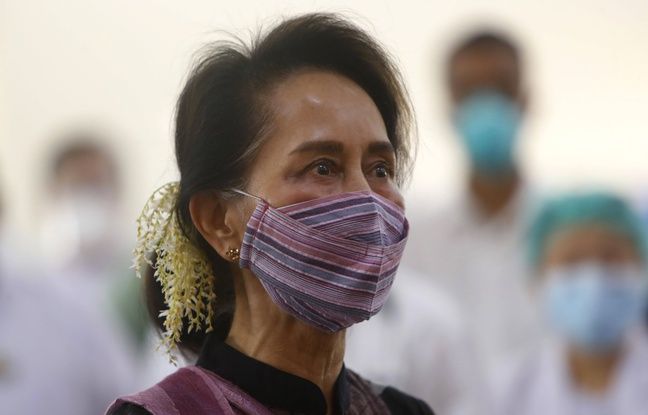 Accused of multiple offenses by the junta, the former Burmese leader, Aung San Suu Kyi, appears on Monday in court the day after one of the deadliest days of repression since the coup.

Since the coup of February 1, more than 2,100 people have been arrested, including the Nobel Peace Prize 199, in a place still kept in secret. She will appear by video conference in the morning, her lawyer Khin Maung Zaw said.

At least 38 pro-democracy protesters were killed by security forces on Sunday, according to the Association for Assistance to Political Prisoners (AAPP). The 75-year-old former leader is being prosecuted on at least four counts: importing walkie-talkies illegally, failing to comply with coronavirus restrictions, violating a telecommunications law and inciting public unrest. The junta also accuses him of corruption, claiming that it has collected $ 600,000 and more than 11 kilos of gold in bribes. Aung San Suu Kyi, 75, appeared to be in good health on March 1 during the last video conference hearing, according to Khin Maung Zaw, who has still not been allowed to meet with his client.

After six weeks of pro-democracy protests, the generals are relentlessly continuing their repression: more than 120 demonstrators have been killed since February 1, according to the AAPP. Murders, persecutions, enforced disappearances, torture: the UN Human Rights Council has denounced probable “crimes against humanity” committed by the army. “The junta leaders must not be in power, but behind bars,” tweeted Tom Andrews, UN Special Rapporteur for Burma on Monday, calling for an immediate end to the “supply of money and weapons” to the military. .

On Sunday, events were particularly tense in Hlaing Tharyar, an industrial suburb of Yangon that is home to numerous textile factories, with 22 people killed. Security forces opened fire on protesters after several Chinese factories burned down, with the Chinese embassy asking authorities to “guarantee the safety” of its businesses and staff. As plumes of smoke rose from the industrial area, numerous military vehicles were deployed and gunfire was heard continuously by residents hiding in homes.

No one has claimed responsibility for the fires, but anti-Chinese resentment has intensified in the country in recent weeks, with some believing that Beijing, a big investor in Burma, has too soft a stance on the putschist generals. As a result of these clashes, the junta declared martial law in two communes of the Yangon metropolitan area, Hlaing Tharyar and Shwepyitha. Anyone arrested in these suburbs will be tried by a military court and face a minimum sentence of three years of forced labor.

Sixteen other protesters perished in various parts of the country on Sunday, with state media reporting that protesters attempted to burn down a police station in Yangon, prompting security forces to open fire to disperse them. A policeman was killed in Bago, northeast of the economic capital. The UN envoy to Burma, Christine Schraner Burgener, strongly condemned this new bloodshed, while the former British colonial power said it was “appalled” by the use of force “against the innocent. “. But the junta is for the moment turning a deaf ear to international condemnations.

Many officials of the National League for Democracy (LND) have been jailed since the coup, two of whom have died in custody. But some deputies, mostly gone underground, have created a Committee to represent the Assembly of the Union (CPRH), supposed to represent the shadow parliament. Its vice-president, Mahn Win Khaing Than, launched a strong appeal this weekend for resistance against this “unjust dictatorship”. “This is the darkest moment in the nation (but) the uprising has to win,” he said. The junta, for its part, warned that membership of this committee amounted to “high treason”, punishable by 22 years in prison. The passage in force of the generals, alleging vast electoral fraud in the legislative elections of November massively won by the NLD, put an end to a decade of democratic transition in Burma.