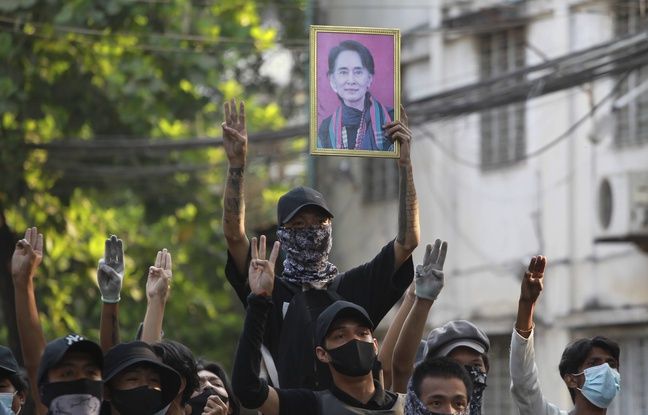 Compromise at the UN. The Security Council “strongly” condemned the deaths of hundreds of civilians in Burma on Thursday, while former leader Aung San Suu Kyi, detained since the military coup of February 1, was formally accused of violating a state secrets law dating from colonial times.

After two days of difficult negotiations, the UN Security Council said Thursday “strongly condemn the deaths of hundreds of civilians, including women and children,” in a unanimous statement largely watered down by China. The fifteen members of the Security Council say they are deeply concerned “by the rapid deterioration of the situation” and “strongly denounce the use of violence against peaceful demonstrators”.

Previous versions of the text, obtained by AFP, included a statement by the West saying that the Security Council was “ready to consider new steps”, a vague allusion to the possibility of international sanctions against the military. China, a traditional ally of the Burmese military, is adamantly opposed to sanctions.

More than 535 people, including many students, adolescents and young children, were killed by security forces in two months, according to the Association for Assistance to Political Prisoners (AAPP). Hundreds of others, held incommunicado, are missing.

The UN envoy for Burma, Christine Schraner Burgener, warned Wednesday against “a risk of civil war at an unprecedented level”, urging “to consider all the means at its disposal to (…) avoid a multidimensional disaster in the heart of Asia ”.

Aung San Suu Kyi, 75, appeared by video conference in a court in Naypyidaw, the capital, for a hearing on administrative issues, such as the formal designation of the eight lawyers on his defense team. She appeared “in good physical condition” and was “bright and charming as always,” commented one of her attorneys, Khin Maung Zaw.

Her defense team had seen her the day before by video and under police surveillance for the first time since the putsch. “She requested a meeting between her and her lawyers – a private meeting to instruct her defense and discuss the case without outside interference from the police or the armed forces,” he added. The next hearing is set for April 12.

The 1991 Nobel Peace Prize laureate is also being prosecuted for “inciting public unrest”. Charges of collecting more than a million dollars and 11 kilos of gold in bribes are added, but she has not yet been charged with “corruption”. If found guilty, she faces long years in prison, risking being banned from political life.

At the same time, former deputies of the National League for Democracy (LND) announced on Wednesday the formation during the first week of April of a “new civilian government” of resistance. In hiding since the coup, they also announced that the 2008 Constitution drafted by the previous military regime was “canceled”. Protesters burned a stack of copies of the text on Thursday on a street in Yangon, the economic capital, where two army-owned supermarkets were set on fire overnight.