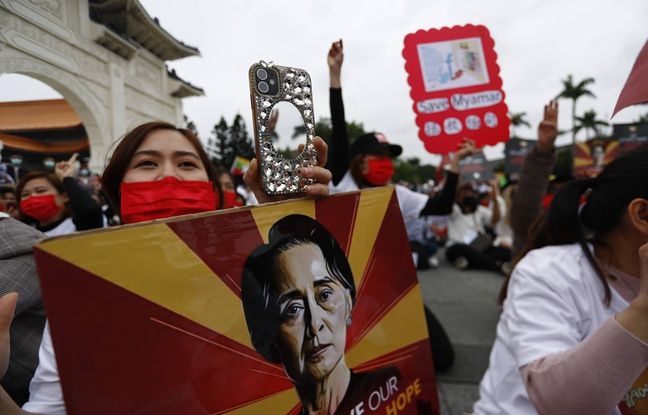 Due to lack of internet, the hearing is postponed. Aung San Suu Kyi, the former 75-year-old Burmese leader, was to appear in court on Wednesday.

But the hearing, which was to be held by videoconference, could not take place for lack of internet connection, mobile data and several wifi networks having been cut for several days to isolate the country. “It has been postponed to April 1,” said Khin Maung Zaw, the lawyer for the former head of government who has still not been allowed to meet with his client. Aung San Suu Kyi has been held in solitary confinement since her arrest.

Two men confessed in videos released in recent days by state media, claiming to have paid him over a million dollars and eleven kilos of gold in bribes. Observers wonder about the authenticity of these testimonies: one of the witnesses is imprisoned, the other has a troubled past.

The 1991 Nobel Peace Prize laureate is also charged with four other counts, including incitement to public unrest.

If she is found guilty of the charges against her, she could be sentenced to long years in prison and be banned from political life.

In addition, more than 600 people arrested since the coup d’état of February 1 were released on Wednesday by the junta, which still holds hundreds of civilians in secret.

“Today we released 360 men and 268 women from Insein prison” in Yangon, a senior prison official said on condition of anonymity.

More than 2,800 civilians have been arrested since the putsch that overthrew Aung San Suu Kyi, according to the Association for Assistance to Political Prisoners (AAPP).

In an attempt to extinguish the wind of democratic rebellion which has been blowing over the country since February 1, the soldiers are stepping up their response every day.

More and more civilians who do not participate in the protest, including women and children, are being targeted.

Seven-year-old girl killed according to association

Tuesday, Khin Myo Chit, a seven-year-old girl was killed “by a fatal shot in the stomach while she was in her house” in Mandalay (center), according to the AAPP. His death has not been confirmed at this stage from an independent source to AFP.

The NGO Save the Children said it was “horrified that children continue to be among the targets”, listing around 20 minors killed in the past seven weeks. A total of 275 civilians perished, according to the AAPP. The toll could be much heavier: hundreds of people arrested are missing.

Tuesday, the spokesman of the junta, Zaw Min Tun, for his part reported 164 victims in the ranks of the protesters, described as “violent terrorists”. He said he was determined to “crack down on lawlessness”, ignoring new sanctions imposed by the United States and the European Union.