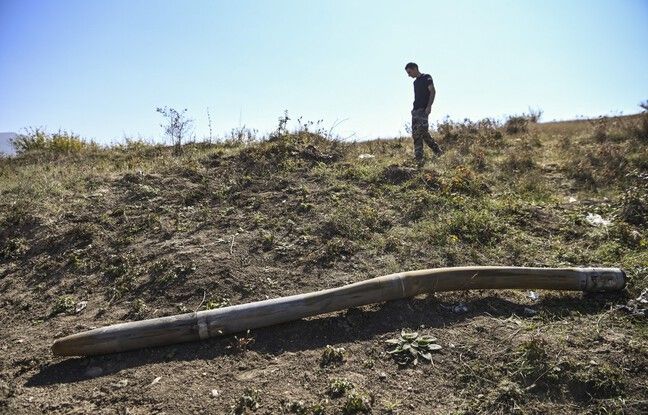 A strategic city. Azerbaijan claimed on Sunday that its troops had captured the Nagorno Karabakh town of Shusha, with Armenia immediately denying it but acknowledging the fighting was raging.

Shusha’s capture would be a major victory for Azerbaijan after six weeks of fighting in Nagorno Karabakh, an Armenian-majority Azerbaijani region that seceded in the 1990s. The city is a symbol for Azerbaijanis, who see it as a of their major cultural centers.

“The city of Choucha has been liberated”

In recent days, both sides had reported heavy fighting around Shusha as Azerbaijan conquered, particularly in the south, large portions of the territory of Nagorno Karabakh.

“With great pride and joy, I inform you that the city of Shusha has been liberated,” Azerbaijani President Ilham Aliyev said in a televised address to the nation.

November 8 “will go down in the history of the Azerbaijani people” as the day “when we returned to Shusha”, he added. “Our liberation march continues” and “we will go to the end, until the complete liberation of all the occupied territories”, assured President Aliev.

Armenia has denied the assertions of Azerbaijani President, Defense Ministry official Artsroun Hovhannissian, assuring that “the fight continues” for the city.

“During the night, fierce fighting broke out in the vicinity of Choucha”, previously said a spokeswoman for the Armenian Ministry of Defense, Chouchan Stepanian, the Armenian government assuring for its part that the capture of Choucha was “a dream. illusory unrealizable for Azerbaijan ”. “Despite heavy damage, the fortress city resists the blows of the adversary,” added the government.

While in Baku, many Azerbaijanis took to the streets on news of the capture of the city, waving their country’s flags and sounding horns, the residents of Yerevan did not want to believe the words of the Azerbaijani president.

“To find out who controls Shushi (the Armenian name of Shusha), we will listen to the commanders of our army, not Aliev. But in any case, I can assure you that the war will not end with the capture ”of the city, Arman, 50, told AFP.

The announcement was welcomed by Turkish President Recep Tayyip Erdogan, who supports Azerbaijan. “The liberation of Shusha is also a sign that the liberation of the other occupied territories is near”, he declared in a televised speech, adding that “the joy of Azerbaijan is our joy”.

Recep Tayyip Erdogan spoke on Saturday evening by telephone with Russian President Vladimir Putin for a “thorough discussion” on Nagorno Karabakh, according to the Kremlin. The Russian president also raised the subject the same day with his French counterpart Emmanuel Macron. A sign of Ankara’s support, Ilham Aliev also met Turkish Defense and Foreign Ministers on Sunday.