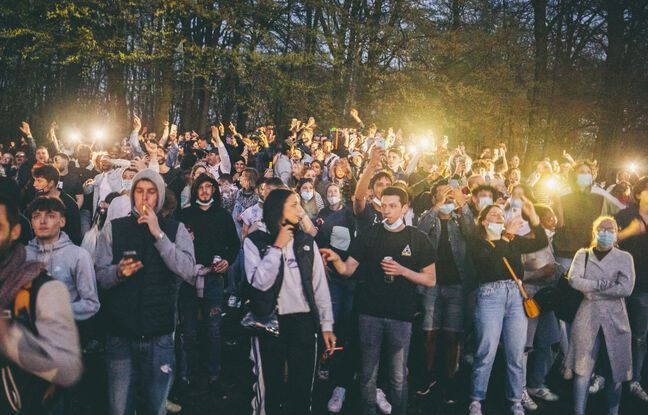 The police used water cannons late Thursday afternoon in Brussels to disperse between 1,500 and 2,000 people gathered in a park for a party despite the ban by the authorities due to the coronavirus pandemic. The police, deployed by the dozen, on horseback or on foot, in riot gear, wiped projectiles when intervening, AFP journalists noted.

Three police officers were injured and one of them had to be taken to hospital, according to a provisional assessment provided around 8 p.m. by local police. Four participants were arrested, a police spokesperson told AFP. The lawns of the Bois de la Cambre park had not yet been completely cleared by the early evening. About a hundred of the “1,500 to 2,000” people who had gathered there in the afternoon remained. On Wednesday, the Brussels public prosecutor’s office warned that the call launched on social networks to rally this park on April 1 for a party was illegal due to anti-Covid restrictions.

The prosecution deplored the organization of “a false event entitled” The Boom “”, warning that the participants exposed themselves to legal proceedings, “given the risks generated by large gatherings”. “I was just there to say that we have the right to go to a public place, not to demonstrate,” one of the participants, Selim Jebira, told AFP, “and we were gassed for no reason” .

Images showed groups of young people singing, dancing, filming themselves on cell phones. According to media reports, police wiped down bottles and cans of beer during the dispersal, and shards of glass also injured several protesters. “People need to get some fresh air, but we cannot tolerate such gatherings in the Bois de la Cambre”, reacted on Twitter the mayor of Brussels, Philippe Close, putting in parallel these excesses with the efforts of caregivers against the virus.

“Those who do not obey police orders risk arrest and prosecution. Thank you to the police for the hard work and to the people who have been respecting the rules for over a year, ”added the elected Socialist. As of Wednesday the prosecution announced the opening of an investigation to identify the organizers of this rally.

Belgium entered a new phase of stricter restrictions last Saturday, including limited access to non-essential shops and the possibility of gathering outdoors for up to four adults. Against the backdrop of the rapid spread of the English variant of the coronavirus, schools and universities closed their doors on Monday, anticipating the fifteen days of Easter school holidays by one week.