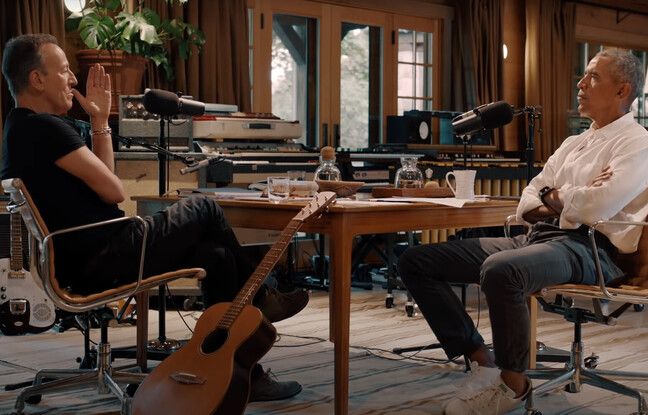 One is nicknamed “the boss”, the other was the most powerful man in the world. Spotify uploaded a new podcast on Monday hosted by singer Bruce Springsteen and former US President Barack Obama. In the first two episodes, the two talk about their unlikely friendship and the racial injustices that tear America apart.

The first two episodes of #RenegadesPodcast with President @BarackObama and @Springsteen are out right now 🤯 https://t.co/piXieqnYrJ pic.twitter.com/RWIqkLx3tH

Renegades : Born in the USA, two of the eight episodes of which have been posted online, marks the entry of the two personalities into the world of podcasting, where they had so far made only a few rare appearances, as guests only. It’s a marketing stunt for Spotify, which has made podcasts a growth driver since 2019 and spent hundreds of millions of dollars on acquisitions in all areas of the ecosystem, from content to marketing to technical tools. creation.

“Apparently Bruce and I don’t have much in common,” says Barack Obama. “He’s a white man from a small town in New Jersey. I am black, mixed race, born in Hawaii. He’s a rock icon. I’m… not that cool. “

The two first met during the 2008 presidential campaign and became friends afterward. They recently met for a few days in New Jersey to record the show, which is a reflection on the State of America and on possible ways of reunifying the country.

“During these conversations, we discovered that we still shared a faith in the American ideal,” said the former head of state, now 59 years old. “Not as a bout of nostalgia, but as a compass for the hard work that lies ahead. “Through dialogue, part of which was filmed,” we found some answers, learned things, laughed, and had a few drinks, “summarizes Barack Obama.

We could have feared a superficial conversation between two VIPs. But in the second episode American Skin : Race in the United States, the two men address the issue of racial inequalities tearing apart an America that seems at a pivotal moment since the death of George Floyd.

Barack Obama returns in particular to one of the dilemmas of his presidency on the question of a possible reparation of slavery. “If you ask me in theory, if it’s justified? The answer is yes, there is no doubt about it. The wealth and power of this country was built, in large part, on the backs of slaves, the White House too. And even after the formal end of slavery, the oppression and systemic discrimination of black Americans during (the era) Jim Crow kept black families from building wealth. This had a generational impact, and the descendants of those who suffered these injustices are entitled to compensation, ”said Obama.

But “in practice, my judgment [quand j’étais président] is that it was unattainable. Seeing the political resistance of whites against aid to the poorest who ” do not deserve it ”, against positive discrimination, proposing a coherent reparation program appeared to me, politically, not just impossible but counterproductive ” , explains the former president, worried about a possible “resentment” of the white popular classes who already have the feeling of having been forgotten by the government.

The former president here takes over from his wife Michelle, whose podcast was one of the great successes of last year, especially with an episode bringing together the two spouses.