Before the arrival of Azerbaijanis, Armenians prefer to burn their houses 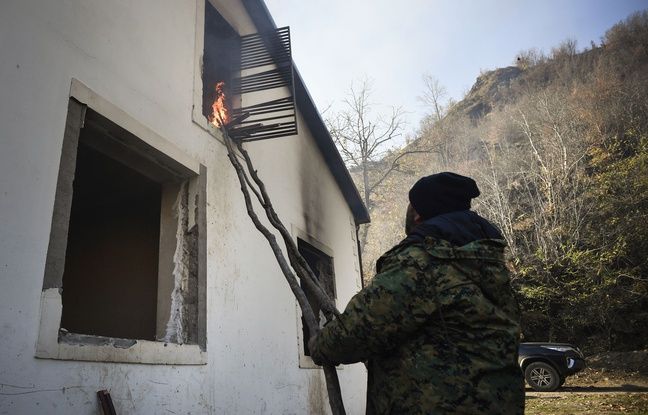 They erase their past life to leave nothing for the new occupant. On the eve of the arrival of Azerbaijani troops, the Armenian inhabitants of the village of Charektar, near Nagorno Karabakh, set fire to their houses on Saturday before leaving the scene. “It is the last day, tomorrow the Azerbaijani soldiers will be there,” comments a man, his throat tight. He ties an old gasoline-soaked sweater to the end of a wooden pole, lights it, and throws it all on the floor, contemplating the spectacle of his house on fire.

The flames are already licking the frame of the tin roof, which is gradually set ablaze. To be sure that all that was left was ashes, he threw embers and burning planks through each of the windows. “This is my house, I cannot leave it to the Turks”, as the Armenians often call the Azerbaijanis. The whole house has been emptied, there is only a huge massage bathtub left in the middle of a room, left there we do not know why, and the plastic of which begins to melt under the heat of the blaze. “Everyone is burning their house today (…) We were given until midnight to leave,” said this man, before getting back into his jeep, without looking behind him, and insulting: “all traitors, all enc… ”.

A humiliating defeat for Armenia

A peace agreement signed earlier this week between Yerevan and Baku, under the aegis of Moscow, ended nearly seven weeks of intense fighting in Nagorno Karabakh, a mountainous enclave disputed for decades between these two Caucasian countries. At the end of this text, which enshrines a humiliating defeat for Armenia, Azerbaijan reconquers large territories under Armenian control since a first war in the early 1990s.

From the heart of Nagorno Karabakh, the village of Charektar marks the entrance to the Kalvajar region, a narrow valley winding along the Tartar River, at the foot of high mountains and sheer cliffs. This region is part of the “protective glacis” formed by Armenian forces around Nagorno Karabakh proper, part of which is also to return to Azerbaijan under the terms of the peace agreement.

Charektar is one of the main inhabited areas, and undoubtedly more than half of the houses in the village, for many modest huts of mountain peasants, have been set on fire in the last 24 hours by their owners on departure.

Each time the same scenes around the homes in flames. Men in military fatigues, returning from the front lines – Armenia admitted this Saturday having lost more than 2,300 soldiers in the conflict -, embark all they can aboard bumpy trucks. “If I can’t find a vehicle, I’ll burn it all,” growls Sargis, 46, sitting outside his filthy house. The prices have soared, and impossible to find a vehicle.

At the soldier’s feet, his meager possessions: a TV antenna, a chandelier from the 1970s, a large plastic container, planks, a tinkered niche in the sheet metal where panicked chickens are crammed … “I already had to burn the hives , I don’t have much time anymore ”.

When and how will the Azerbaijani forces arrive? Nobody knows. The Nagorno-Karabakh authorities have assured that the Kalvajar road, now the only road linking the enclave to Armenia, will remain under their control. Russian soldiers circulate there. “The Azeris will arrive (in Kalvajar) by helicopter,” Sargis believes.

On this same road, it is the great migration. Traffic is incessant towards the Armenian border town of Vardenis, via the Sodits pass at 2,700 meters above sea level. Everything that is transportable to Kalvajar from here tonight appears to be being brought back. Trucks load the elephant-sized transformers of hydroelectric stations. A swarm of lumberjacks are busy cutting and chopping the trees along the road to make large logs as soon as they are shipped to Armenia, where wood is traded cheaply. Shepherds quickly convoy herds of cows and sheep, cluttering up the road a little more.

On the verge of being abandoned, the military base in Kalvajar is open to the four winds. Like ants, the soldiers still present remove the sheets of the roofs of the hangars, repackage boxes of ammunition, broken-down 4X4s and anything that can still be picked up. Papers are burning in the staff yard. “Danger, mines! », Warns in Armenian a sheet plastered at the entrance of one of the barracks.

On the wall, a pig’s head and two words, roughly tagged in yellow paint, with a clear message for the attention of imminent arrivals: “Fuck Azer! “.