Belgium takes a tribute to the victims 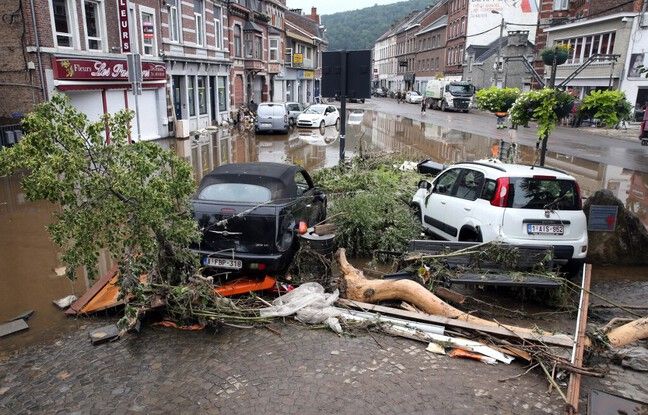 A day of “national mourning”, marked by a minute of silence at noon, will take place this Tuesday in Belgium, to pay tribute to the victims of the floods of an unprecedented scale which devastated the region of Liège (east) on the 14th and 15th. July.

Heavy floods due to torrential rains, which caused the collapse of dozens of houses, claimed the lives of 31 people, according to a still provisional report on Monday evening. And 70 others were “still missing or unreachable”, according to the crisis center, a figure which has decreased in the last 48 hours as telephone contacts are reestablished.

The King and the Prime Minister to the victims

The valley of the Vesdre, a tributary of the Meuse out of its bed under the effect of downpours and the saturation of a dam, concentrates at least half of the victims, according to local elected officials. Chaudfontaine, Trooz, Dison, Pepinster, Angleur or Chênée, near Liège, are among the devastated localities, where water has infiltrated everywhere, sometimes up to several meters in height. This is also the case for Verviers, where the King of the Belgians Philippe and Prime Minister Alexander De Croo are expected late Tuesday morning for the official tribute, in the presence of Walloon elected officials and officials.

The King and the Prime Minister will meet with rescuers and victims, before the sirens of the town’s barracks sound at 12 p.m. sharp (10 a.m. GMT), according to the program communicated by the Ministry of the Interior. The minute of silence will follow, which all of Belgium is called upon to respect, particularly in official buildings and public services. All flags will be at half mast for the day.

Recollection at the Tokyo Olympics

The Belgian athletes present in Tokyo for the Olympic Games will be in unison with their country, while in Brussels, buses, subways and trams will stop for one minute. Since Friday, the water has gradually receded revealing a landscape of desolation: gutted houses, stacked cars, branches and rubbish piled up against bridges. The victims are working to clean homes and streets, helped by volunteers who sometimes come from abroad.

At the same time, the emergency services are continuing search operations in the most affected places, and securing many buildings that threaten to collapse. These floods are “without any precedent in our country”, declared Friday Alexander De Croo announcing this day of mourning, on the eve of the national holiday of July 21 which will be celebrated in a restricted manner.

The “National Ball” of Brussels canceled

The city of Brussels has canceled its “National Ball” and that of Namur, capital of Wallonia, its fireworks. This is the first time since 2016 that Belgium has observed national mourning. Three days of mourning had been decreed that year following the jihadist attacks which left 32 dead and more than 340 injured in Brussels.

In addition to major disasters, the deaths of important figures and members of the royal family can also be marked by one or more days of mourning throughout the kingdom. The strong floods last week also affected Luxembourg, the Netherlands and especially Germany, where the authorities deplored at least 165 deaths according to a provisional toll.

The Argentine pope in the land of Viktor Orban