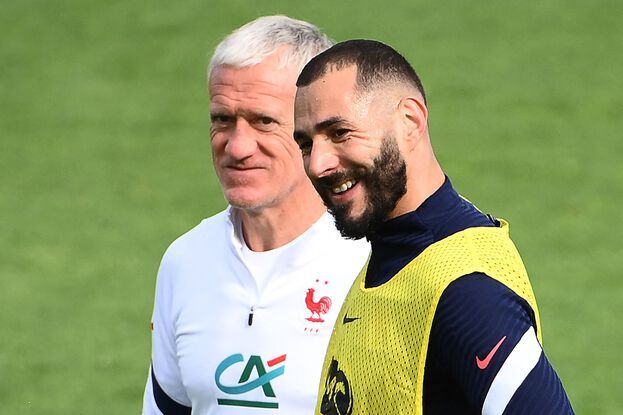 It is written. The 19 will be the star number of the summer in the streets and on the beaches, from Brest to Menton and from Strasbourg to Hendaye. Nothing to do with a Corrèze “hype” fueled by a new hit from Trois Cafés Gourmands. We are talking here about the return of Karim Benzema to the France team for the Euro, flanked by the number of his Lyon debut. “Since I worked at Unisport, a little over five years ago, this is the first time that I have seen a single player move an entire market,” said Victor Saulnier, France sales manager for the Danish distributor of sport stuff.

Buried the 2016 European Championship at home, buried the 2018 World Cup… Since the surprise disclosed by Didier Deschamps on May 18 in front of more than 10 million viewers, the KB9 wave remains in suspension. “We sell more Benzema jerseys than jerseys of all the other players combined,” resumes the salesperson. More generally, between the day before and the day after Deschamps’ announcement, we sold 2,400% more France team jerseys. And it continued the following days. “

How many Nike tunics does that represent? Unisport remains silent on the subject, citing a very competitive environment. On the side of the FFF, we do not communicate more on the figures. But Marie Trubert, merchandising and licensing manager, confirms “a very big spike following the announcement” on the federation’s online store, “stronger” than in previous competitions. “There are several effects. This jersey is precious and desirable because there is the badge of world champion. We are also coming out of a period of health crisis and people want to have fun… ”

And the returning Madrid? “Yes, there is a Karim Benzema effect, which has not been seen in the France team since 2015, concedes Marie Trubert. It is the return of a very good player, elected best French player playing abroad by the UNFP, there is a particular enthusiasm. It is above in terms of flocking, even if other jerseys are also in great demand, such as those of Griezmann, Mbappé, Kanté, Hernandez or Giroud. “

We come to technical questions. If the jersey is produced in Asia, the numbers and letters that adorn it are “made in France”. More exactly made in Espéraza, a town of 1,800 inhabitants nestled in the upper valley of the Aude, mainly known for its dinosaur museum. Founded in 1906, the Monblason company and its fifty employees cultivate more than a hundred years of know-how combined with remarkable discretion.

“There are players we expected, and then there was a surprise, simply confides our interlocutor on the phone. We didn’t expect it at all. But it’s part of our job and it’s pretty positive. »Curtain.

Monblason had to urgently concoct a “Benzema” plate and numbers 19 that the employees of the sports shops will display for the fans. “It is already being delivered,” assured the FFF on Thursday. In the meantime, it tinkers. “We have all the letters of the alphabet in stock as well as the numbers 1 and 9 to make the 19,” indicates Victor Saulnier of Unisport. We also have standard flocking, for all players that exist. It is identical in color and we are getting closer in terms of style, without copying it because we are not authorized to do so. There is also no FFF logo in the number. “The official” Benzema 19 “should therefore soon decorate the backs of fans frustrated by the long absence of the gunner of Real.

Specimens that are not necessarily found among the French Irresistibles, according to Fabien Bonnel, the spokesperson for some 900 members of the association of supporters of the French football teams. “Honestly since the announcement of Didier Deschamps, I have not seen any change, nor people telling me that they had bought the jersey, indicates the thirty-something Parisian not a fan of the current navy blue, and nostalgic for the royal blue of the years 1990. It is rather when the jerseys are released that there is enthusiasm. “

“Well, I’m not a good example because it must be 20 years since I bought one. I prefer to put money on travel for the France team. But if there is enthusiasm, so much the better: the more people we see with this jersey, the happier we will be because we will feel that the French are behind the team. For Benzema, so much the better if we get stronger sportingly, but I’m passionate about the France team, not a player. “

On the side of the FFF, we assure that we will do the accounts later. The more Karim and his long-lost friends go far, the more the sum will be tidy, knowing that a jersey with flocking costs a hundred euros. “He sells it every minute,” says Marie Trubert. If you are European champions, not everyone will have their jersey. In any case, not number 19.