Blinken wants to unlock $ 75 million in aid for Gaza, but doesn’t want Hamas to “benefit” from it 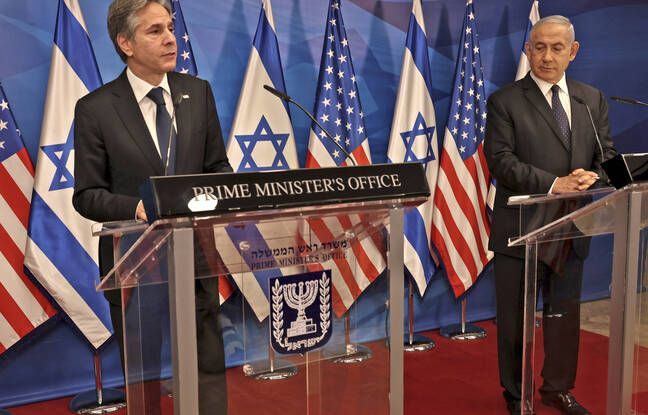 During a press conference with Israeli Prime Minister Benjamin Netanyahu, the US Secretary of State also asserted that Israel’s response would be “very powerful” if Hamas violated the ceasefire with put an end to 11 days of war between the Jewish state and the Islamist movement in power in Gaza.

“There is a lot of work ahead of us to restore hope, respect and some trust between the two camps. We have seen where the other options lead and this must prompt us to redouble our efforts to preserve the peace, ”said Antony Blinken in Jerusalem.

From May 10 to 21, 253 Palestinians were killed by Israeli strikes in the Gaza Strip, including 66 children and fighters, according to local authorities. In Israel, rocket fire from Gaza killed 12 people, including a child, a teenage girl and a soldier, according to police.

Reaffirming “full support for Israel’s right to defend itself”, Antony Blinken also specified that he would announce an American contribution for the reconstruction of Gaza during the day. He arrived mid-afternoon in Ramallah, in the occupied West Bank, where he began talks with Palestinian Authority President Mahmoud Abbas, who does not wield power in Gaza, however.

Towards a “two-state solution”

In the wake of the ceasefire, Washington reaffirmed its support for the “two-state solution”, Israeli and Palestinian, supported by the international community but shunned by the Trump administration. The most recent statements from the State Department and the White House, however, make no reference to the “two-state solution”. “Our priority is really above all to ensure that the ceasefire holds,” said a senior American official before the departure of the Secretary of State, deeming “premature” all more ambitious targets.

Israel, which has imposed a land and sea blockade on Gaza for nearly 15 years, accuses Hamas of having diverted international aid for military purposes and has said it wants an international “mechanism” to bypass it in sending aid. . Israel announced the daily reopening on Tuesday of the Kerem Shalom crossing, which had hitherto been open on an ad hoc basis, for humanitarian aid. Sick people will also be able to enter and leave Gaza for the first time since May 10, and the fishing zone off the enclave will be extended to six nautical miles (about 11 km).

The conflict between Hamas and Israel, the deadliest since the 2014 war, erupted on May 10 when Hamas fired bursts of rockets at Israel in solidarity with the hundreds of Palestinians injured during days of clashes with Israel. Israeli police on the Mosque Plaza in occupied East Jerusalem. At the origin of the clashes, the threat of expulsion of Palestinian families for the benefit of Israeli settlers.

Hamas, organization classified as “terrorist” by the United States

After his stopover in Jerusalem and Ramallah, Antony Blinken must go from Wednesday to Egypt and Jordan. Traditional mediator between Palestinians and Israelis, Cairo is active to consolidate the ceasefire which includes no conditions for the cessation of hostilities and does not establish any plan for the reconstruction of Gaza, once again devastated by war . An Egyptian delegation is in the enclave for talks with Hamas, an organization classified as “terrorist” by the United States and the European Union.

In Ramallah, President Abbas welcomed Egyptian foreign minister Sameh Choukry on Monday. On Tuesday, he received Jordanian Foreign Minister Ayman Safadi, who hailed a “positive American position” and considered that the current discussions were “a crucial moment”. Despite intense diplomatic efforts, tensions persist on the ground.

A Palestinian was killed at dawn by Israeli forces near Ramallah in the occupied West Bank. On Monday, a knife attack injured two people, including an Israeli soldier, in Jerusalem. The assailant, a 17-year-old Palestinian, according to the official Palestinian agency, was shot dead by Israeli security forces.