Bolsonaro supporters take to the streets despite the pandemic 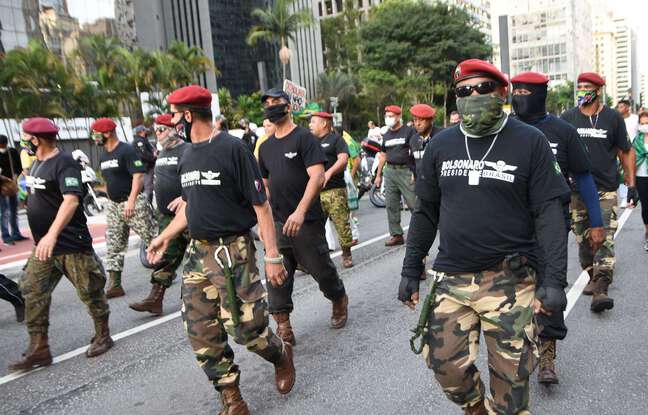 The coronavirus will not have stopped supporters of Jair Bolsonaro. In defiance of any physical distancing, several thousand people took to the streets of Brazil on Saturday during demonstrations in support of the far-right president. The opposition has chosen to celebrate May 1 online.

The rallies took place in Brasilia, Sao Paulo and Rio de Janeiro, with demonstrators dressed mostly in yellow and green, the colors of the Brazilian flag, where more than 400,000 people have died from Covid-19.

In Rio, several hundred demonstrators met on the edge of Copacabana beach, with banners calling for “military intervention” to strengthen the president’s powers. Two weeks ago, the head of state declared that he was waiting for “a sign from the people” to “take measures” to put an end to the health restrictions taken locally by mayors or governors. More recently, he said that the army “could go to the streets one day, to uphold the Constitution, the freedom to come and go”.

One of the slogans of the demonstrations on Saturday was precisely “Autoriso Bolsonaro” (I authorize Bolsonaro) to send the army. In Brasilia, several thousand people gathered on the Esplanade des Ministries, which President Bolsonaro flew over by helicopter at the height of the demonstration. Meanwhile, one of his sons, MP Eduardo Bolsonaro, was in the middle of the demonstrators, wearing the mask at the chin level and taking photos with many supporters, also with their faces uncovered.

“A sad May 1st for the workers”

“You have to clean up Brasilia to let the president rule,” said Elenir Ritonni, a 63-year-old pensioner, in Sao Paulo, where several hundred people had gathered. “Before, on May 1, there were red flags as if we were a socialist country. I am happy to see green and yellow flags all over the country, with people who really work, ”the far-right president said on Saturday during a video conference.

Very few anti-Bolsonaro demonstrations were planned for this May 1, but opposition political figures, from the right and the left, together participated in a live organized by the country’s main unions on social networks. Among them, former President Luiz Inacio Lula da Silva (2003-2010), who could run for a third term against Bolsonaro in 2022, and his center-right predecessor Fernando Henrique Cardoso (1995-2002). “It is a sad May 1 for the workers of our country, a day of mourning for the 400,000 lives lost to Covid-19, many of them because the Bolsonaro government refused to buy the vaccines that were offered to him, ”Lula said.