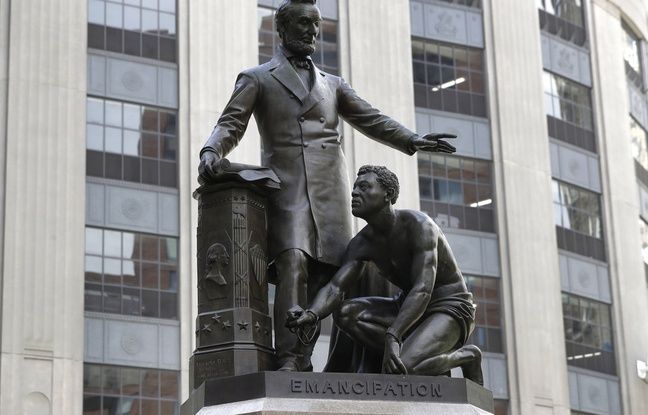 The northeastern city of the United States voted in June to remove the statue, where Abraham Lincoln, the driving force behind the abolition of slavery in the country, stood above a naked black man on his knees. She had motivated this decision, judging that the statue had a role “in the perpetuation of hurtful prejudices” towards the African-Americans and that it contributed to underestimate their role “in the fight for the freedom of the nation”.

A sculpture in place since 1879

Installed since 1879 in a square in the capital of Massachusetts, the statue was a replica of an 1876 statue erected in Washington. Funded by a group made up mostly of former slaves, the latter had no say in the design of the statue which was intended to commemorate the Emancipation Proclamation and to honor Abraham Lincoln. The 16th President of the United States, nicknamed “Abe the Honest” and “The Great Emancipator” had abolished slavery in the United States with this Emancipation Proclamation of 1863.

In the wake of the protests triggered by the death of George Floyd in Minneapolis on May 25, several statues of historical figures such as Christopher Columbus, Theodore Roosevelt, or Robert E. Lee were debunked or vandalized in the United States, notably in Boston, Richmond , and Washington.