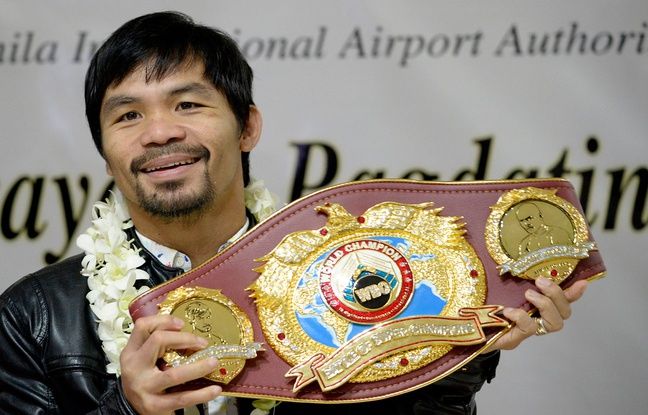 One fight can hide another. After two years of inactivity, Filipino boxing legend Manny Pacquiao will return to the ring in August for what could be the last fight of his career, before leading the one for the presidency. Facing the American Errol Spence in Las Vegas on August 21, Pacquiao, crowned in six different weight categories and national hero, will be able to both prove from the top of his 42 years that age does not matter, but also get a bonus. lucrative before embarking on the presidential race next year.

“I will announce my decision at the appropriate time, perhaps after the fight”, explains the current senator, elected in his hometown of General Santos, where he trains. For the moment, he says he is focused on this future duel against Spence, holder of the WBC and IBF welterweight titles since 2017.

“I felt that I was still hungry”

Pacquiao, who has a record of 62 wins, 7 losses and 2 draws, is fighting for the first time since winning Keith Thurman in July 2019, to win the WBA welterweight belt. For want of having then defended it, he was then deposed in January.

But his age, and his distance from the rings do not frighten the one who has managed to get out of poverty to become one of the greatest boxers in the world. “I felt that I was still hungry, I am impatient to fight… I have the same feeling as when I was 22, 23 years old”.

And whether he wins or loses, the father will remain a hero in the poor Philippines, where his generosity and his path to success are deeply admired. Some even wait for him outside his General Santos gym, hoping to spot him, and receive some cash, before Pacquiao disappears in his olive green Hummer. “He’s everyone’s idol here,” says Meme Dipundato, a 40-year-old trike driver. What I really like about him is not his boxing but what he does to help the poor. “

“So many problems in this country”

But Pacquiao has also sparked controversy since entering politics in 2012, first as a congressman and then in the Senate, flaunting his support for the death penalty and describing same-sex couples as “worse than animals.”

If he becomes president, Pacquiao promises to spare no effort, starting by sending “hundreds or thousands” of crooked politicians to a purpose-built “mega prison”. “There are so many problems in this country caused by corruption, there is no development, no economic growth, no improvement,” he adds.

His star status, in a country renowned for its celebrity-obsessed politics, would put Pacquiao in a strong position in the presidential race, although that doesn’t guarantee his victory. A public row with President Rodrigo Duterte over official corruption and the handling of a maritime dispute with Beijing could well erode the valuable support the boxer currently enjoys.

Until recently, “Pac-Man” was also a high profile supporter of Duterte and his controversial war on drugs, which prosecutors at the International Criminal Court want to investigate for the alleged unlawful murder of tens of thousands. of people. Manny Pacquiao, for his part, wants to continue the repression, but in an “appropriate way”.

Before that, it will be necessary to start by leading the fight against a potential adversary of size: Sara, daughter of Rodrigo Duterte, if the latter decides to come forward. The mayor of Davao, one of the biggest cities in the Philippines, has so far more support than the champion, in his quest for this completely different title.