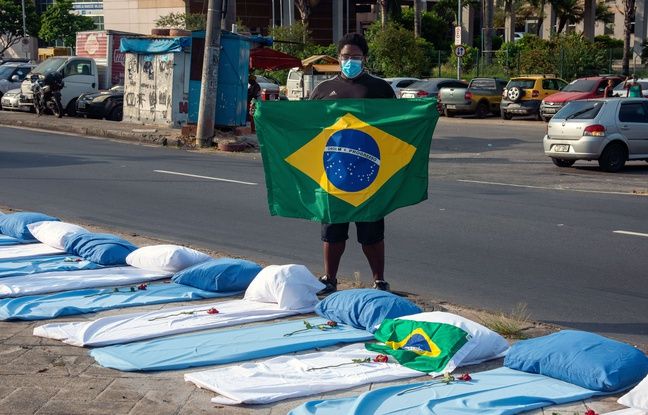 The Covid-19 pandemic is out of control in Brazil. Morbid figures even fly from record to record. The country thus exceeded the threshold of 300,000 deaths in one year on Wednesday. Behind the United States, it is the second most bereaved country in the world. It also recorded nearly 90,000 additional cases of contamination in 24 hours. In one year, 12.2 million people were infected in the country of 212 million people.

Above all, mortality from the coronavirus has been steadily accelerating since the last week of February. According to data from the Ministry of Health considered to be underestimated by many scientists, 2,009 new deaths were recorded on Wednesday, bringing the total of deaths to 300,685.

Faced with soaring mortality, and the absence of a national policy against the virus, many states and cities have taken measures in scattered order. Curfews or activity restrictions such as the closure of bars and restaurants have been decided, as in Sao Paulo and Rio de Janeiro. These two metropolises have announced days of anticipated leave for next week in the hope of limiting the movements and mixing of their populations.

On Wednesday, President Jair Bolsonaro set up a crisis committee, in the face of criticism of his flippancy. “The prevailing feeling is solidarity to minimize the effects of the pandemic. Life above all, ”said the far-right leader, the day after Brazil had recorded more than 3,000 deaths in 24 hours, a record. Changing his way while he has so far denigrated confinements, social distancing and, recently, even vaccines, Jair Bolsonaro estimated that Brazil should “get out of this complicated situation (…) without conflict, without politicization” .

Tuesday, in a speech where, rare, he expressed a little empathy for “all those who have lost a loved one”, the president had promised the Brazilians that with 500 million doses they would all be vaccinated before the end of the ‘year. But two months after its launch, the vaccination is progressing slowly: only 3.7 million Brazilians have received two doses due to logistical problems and lack of vaccines. The new Minister of Health, Marcelo Queiroga, the 4th in a year, has promised to triple “in the short term”, to one million per day, the number of vaccinations.