California firefighters face fire that generates its own climate 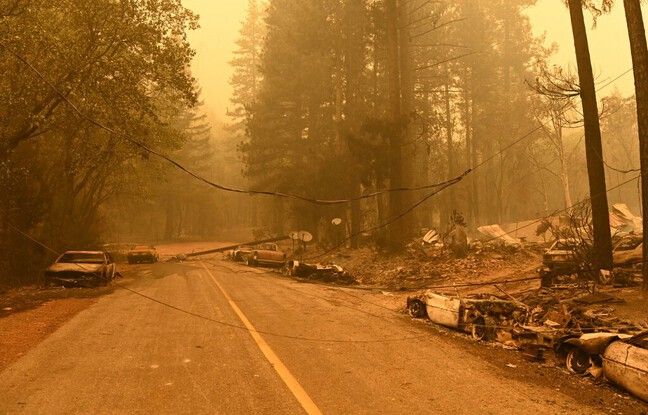 The biggest fire in California, which has already devoured the equivalent of the city of Chicago in vegetation, is so large that it now generates its own climate, at the risk of making the task of firefighters fighting it even more difficult on Monday. 5,400 firefighters are mobilized against the flames of the Dixie Fire in the forests of northern California. This blaze has only grown since mid-July, fueled by stifling heat, alarming drought and continuous winds.

The Dixie Fire is so big that it has already created in recent days clouds called pyrocumulus which cause lightning, high winds and in return feed the fire. “The day tomorrow could be very difficult: if these clouds are high enough, they have the potential to produce lightning,” warned Julia Ruthford, the meteorologist assigned to this blaze.

Rescuers have been dispatched from as far away as Florida to lend a hand.
Despite its size, the Dixie Fire has so far mainly progressed in extremely secluded areas, which explains why only dozens of structures (houses and other buildings) have so far been destroyed.

Progressing on extremely steep paths, firefighters are sometimes assisted by a train, from which they can generously water the otherwise inaccessible areas. But in these weather conditions, “the embers can easily fly more than a kilometer from the fire” explains to AFP Rick Carhart, spokesman for the firefighters, and the places that welcome evacuees such as the village of Quincy, are find themselves threatened.

“It is very painful to see him progress relentlessly and get closer to our land,” worries AFP Peggy Moak, resident of a neighboring town.
Wildfires are common in California – so much so that locals sometimes wonder what is left to burn. But due to climate change, this summer is particularly violent. A golf course with yellowed grass, boaters swimming in a lake that is only a shadow of itself … In the region, signs of the drought that feeds the blazes are everywhere.

The fires have already devastated three times more vegetation this year than they had at this time in 2020, yet the worst year in California history in terms of fires.
According to a preliminary investigation, the fall of a tree on one of the thousands of electric cables which outline the American landscape is at the origin of the Dixie Fire. This power line is that of Pacific Gas & Company (PG&E), a private operator already guilty of causing Camp Fire, a blaze that nearly wiped the town of Paradise off the map and killed 86 people in 2018, to only a few kilometers from here.

The virus can probably wake up in a survivor after years

The government renounces the vaccine passport