Can Donald Trump be “reinvested” as president in place of Joe Biden as he would have suggested? 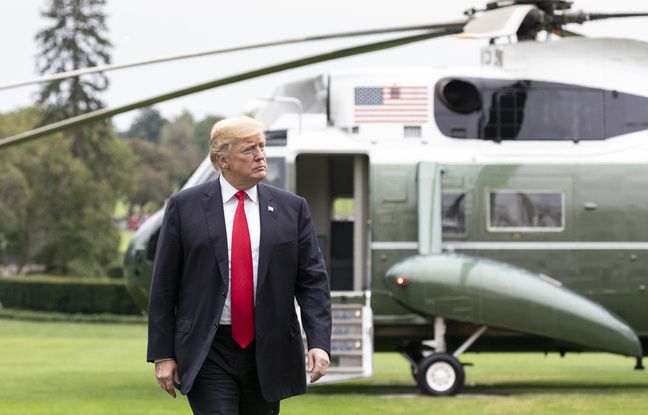 Despite 61 lost appeals in court, two in the Supreme Court, recounts and audits in half a dozen states, results certified by Congress and Joe Biden’s inauguration, Donald Trump would not have fully surrendered arms. According to the journalist from New York Times Maggie Haberman, the former American president confided to relatives he expected to be « reinstated (Reinvested or reinstated) in the White House by August. His ex-lawyer Sidney Powell also mentioned last weekend this hypothesis as delusional as it is improbable.

Can the pseudo-audit in Arizona be a game-changer?

This hallway noise does not come out of nowhere. In the press releases he publishes on his blog or through his Political Action Committee, Donald Trump regularly cites a pseudo-audit of ballots sponsored by Republican senators from Arizona, who reject the official results. “Let’s see what they find in Arizona. I wouldn’t be surprised if they found thousands and thousands of votes. And then, we’ll look at Pennsylvania, and Georgia, and Michigan, Wisconsin and New Hampshire… It was a rigged election, ”Donald Trump told the guests of Mar-a-Lago on May 1, before taking its summer quarters in New Hampshire.

This analysis of the bulletins has no legal value. It is run by a Florida company, Cyber ​​Ninjas, which has no experience with election audits. Her boss, Doug Logan, shared conspiracy theories about so-called voter fraud on a since-deleted Twitter account.

An official audit already took place in Maricopa County (the city of Phoenix) last November. 5,000 ballots from 26 polling stations, which had been machine counted, were checked by hand. No error was found (pdf), and the results were certified by the commission in charge of the poll, where the Republicans are in the majority. A new check of the voting machines last February did not reveal any problems. In mid-May, Cyber ​​Ninjas and the Republican patron of the Senate assured that a database had been erased. Donald Trump screamed scandal. But this was a mistake by the audit officials. The files were never deleted.

Can a former president be “reinvested”?

Mike Lindell, the boss of MyPillow pillows, from whom the voting machine maker Dominion is claiming more than $ 1 billion in defamation, says he has “compelling evidence” of votes altered by a cyberattack from China. Last week, he assured former Donald Trump adviser Steve Bannon that he was working with justice ministers from several Republican states. And predicted that the Supreme Court of the United States would take up their appeal and overturn the election results by “9-0”. In parallel, lawyer Sidney Powell – also sued by Dominion – said this weekend at a conference organized by QAnon supporters that Donald Trump “could simply be reinvested, and a new inauguration date proclaimed” .

The Supreme Court refused to hear two post-election appeals, from Republicans in Pennsylvania and the State of Texas. Above all, the window has long been closed, as Joe Biden was sworn in on January 20. According to the professor of constitutional law Steve Vladeck, “Sidney Powell invents (a new theory). There is no law or statute for “reinvesting” a president “. The only way to end the tenure of a White House tenant is through impeachment or the 25th Amendment to have them declared incompetent. To change this would require amending the Constitution via a two-thirds majority vote in Congress.

The army, the last resort?

At the same conference, General Michael Flynn, former National Security Advisor to Donald Trump, appeared to support a coup. A participant asked him “why couldn’t what happened in Burma happen here?” Flynn’s response: “No reason. I mean, it should be happening here. “

The suggestion of Michael Flynn, who had previously advised Donald Trump to declare martial law after the election, sparked an uproar, especially after the riots on Capitol Hill. Some, such as retired Lieutenant Alexander Vindman, felt that these “seditious” remarks could be punishable by court martial. Flynn tried to back down, assuring that he had said “There is no reason for this to happen here”. But the video is clear, Michael Flynn pauses after “no reason”, before adding: “It should happen here”, without negation, to the applause of the room.

For Donald Trump, who finds it difficult to exist without his Twitter and Facebook accounts, evoking a possible shattering return to the White House makes it possible to galvanize his most die-hard supporters and to continue to raise funds for a possible candidacy in 2024 And he might need it before: A grand jury tasked with deciding whether to hold a possible Trump trial was convened last week in Manhattan, and is expected to rule in the coming months.

Share
Facebook
Twitter
Pinterest
WhatsApp
Previous articleAn amending budget between “whatever the cost” and end of the crisis in the Council of Ministers
Next article“Hatred never disappears, it hides,” warns Joe Biden, who came to “break the silence”