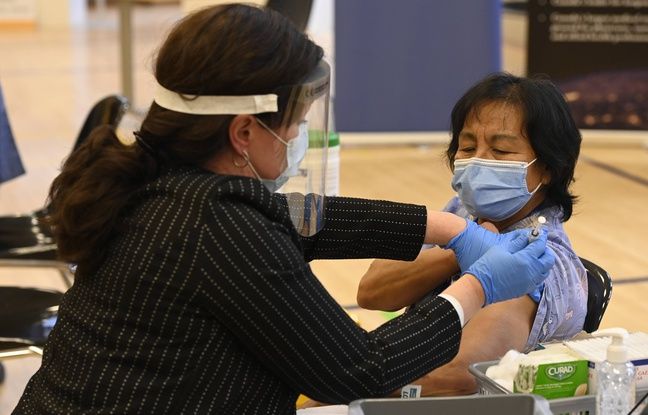 As with its American neighbor, Canada on Monday launched a vast vaccination campaign against Covid-19 in Quebec, Montreal and Toronto. The television cameras first showed a first live vaccination from a Toronto hospital, that of a nursing aide in a retirement home in the metropolis, Anita Quidangen. An hour later, Quebec’s Minister of Health, Christian Dubé, announced that Gisèle Lévesque, an 89-year-old woman, had previously been vaccinated in a center for the elderly in Quebec City.

Less than a week after the approval of the Pfizer-BioNTech vaccine by the Canadian authorities, “about 5,000 people”, according to the minister, should be vaccinated over the next few days in Quebec and Montreal, employees and residents of nursing homes. retirement. “Today, we have really passed a milestone,” said Dr. Kevin Smith, president of the University Health Network of Toronto, congratulating the first five caregivers who received the vaccine.

Canada, the third country to have approved the Pfizer vaccine after the United Kingdom and Bahrain, is due to receive up to 249,000 doses by the end of the month. Authorities expect to receive six million doses of the Pfizer-BioNTech and Moderna vaccines – pending approval, in the first quarter of 2021, allowing three million people to be vaccinated in two doses. Most Canadians are expected to be vaccinated in September 2021, Prime Minister Justin Trudeau has promised.

Nearly one in two Canadians (48%) want to be vaccinated “as soon as possible,” up from 40% a month ago, according to an online survey conducted by the Angus Reid Institute. One in seven Canadians (14%) do not want to be vaccinated. The evolution of the figures is explained by the acceleration of the pandemic in recent weeks. The country recorded a total of 464,313 cases of coronavirus on Monday and 13,479 deaths.