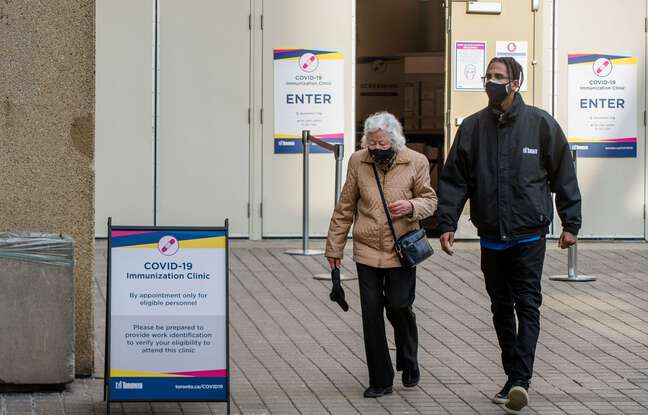 Like many countries, Canada is currently facing a third wave. Above all, the country crossed the threshold of one million cases of coronavirus on Saturday, forcing several provinces to tighten restrictions in recent days.

With just over 2,000 new cases of Covid-19 announced in British Columbia (west) on Saturday evening, Canada has therefore slightly exceeded the mark of one million cases since the start of the pandemic, according to figures reported by televisions Canadian. Just over 23,000 people have died to date.

To slow the spread of the virus, Ontario, the most affected province with just over a third of the number of cases, has since Saturday tightened restrictions for at least four weeks. Schools remain open and residents of the province have not been ordered to stay at home, but businesses deemed non-essential can only accommodate 25% of their regular customers at a time, compared to 50% for others. Sports halls and hairdressing salons are closed.

Quebec, the second most affected province, has established containment in several regions in addition to maintaining a nighttime curfew since early January, an unprecedented measure in Canada on a provincial scale since the Spanish flu epidemic it a century ago.

This third wave is affecting the country while the vaccination campaign is struggling to take off. In December, Canada was one of the first countries in the world to vaccinate, but the campaign was slowed in early 2021 by delays in deliveries of Pfizer-BioNTech and Moderna vaccines, imported from Europe. The country also recently restricted the use of AstraZeneca’s vaccine, now reserved for people over 55. To date, 14.6% of the Canadian population has received at least one dose of the vaccine, according to the Covid-19 Tracker Canada site.