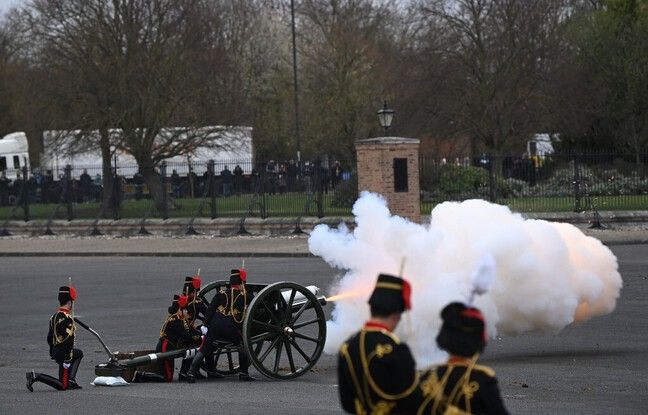 Cannon salutes were fired across the UK at noon on Saturday in memory of Prince Philip, in the aftermath of the death at the age of 99 of the husband of Queen Elizabeth II, who loses his tallest “Support”.

From the Tower of London on the banks of the Thames, the castles of Edinburgh or Belfast, in the British enclave of Gibraltar, on the ships of the Royal Navy, where he served during World War II, the sound of cannons has sounded at noon. This salvo, the first in a series of 41 (one per minute), pays homage to the man who had become the patriarch of the British royal family, after being born Prince of Greece in Corfu and having spent a childhood tossed around the world. Europe.

No state funeral, according to his wishes

Two months away from celebrating his 100th birthday, the Duke of Edinburgh passed away “peacefully” at Windsor Castle, west London, on Friday morning. The Queen, who will turn 95 on April 21, has expressed her “deep sadness” to lose the one who was her husband for more than 70 years and the father of her four children (Charles, Anne, Andrew and Edward).

Known for not having his tongue in his pocket, Prince Philip was noted for his provocative remarks sometimes tinged with racism or sexism. But the British also remember his tireless dedication to a monarchy that he helped to modernize and humanize, and his presence, withdrawn but flawless, alongside the sovereign. “He represented stability but also fun, a sense of humor, which we sometimes give the impression of having lost,” Heather Bridge, 65, told AFP near the Tower of London. “He had that lovely British sense of fun,” she added, saying sorry for the Queen: “It’s a devastating loss for her.”

From Friday evening, the bells of Westminster Abbey, where his marriage was celebrated in 1947, rang 99 times, once a minute, in homage to the 99-year-old prince. Minutes of silence are observed before Premier League football matches. Buckingham Palace has not announced details of the organization of his funeral. However, we know that in accordance with his wishes for simplicity, and because of the pandemic which has hit the United Kingdom hard, it will not be a state funeral. His remains will rest at Windsor Castle before a funeral at St George’s Chapel.