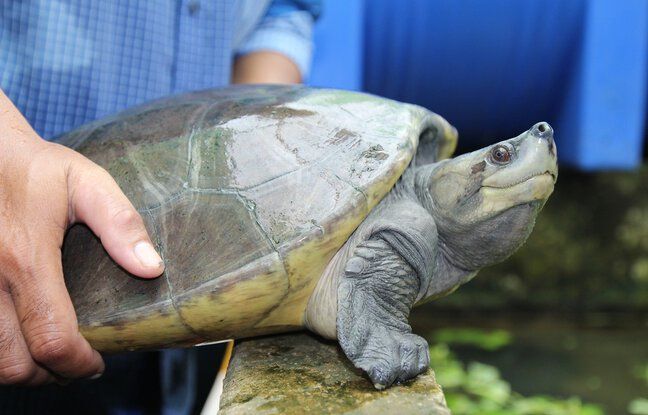 Captive king turtles, an endangered species, have for the first time laid eggs in a silted enclosure in Cambodia, a great victory for conservationists. The country is home to several endangered turtle species, although their numbers have declined in recent years due to high demand in Vietnam and China, as a culinary specialty or for traditional medicine.

King turtles (Batagur Affinis), also known as “Southern River Terrapins”, are in danger of extinction due to hunting but also to the extraction of sand, which destroys the shores where they lay their eggs. So much so that in 2000 we believed the species wiped out in Cambodia, while it has already disappeared from Singapore and Vietnam. Wild nests were eventually discovered and a conservation effort was put in place by the kingdom’s authorities.

The NGO Wildlife Conservation Society (WCS) announced on Tuesday that four captive-bred king turtles had successfully laid 71 eggs. “This is the first time that captive female king turtles have laid eggs since they were taken into the center in 2006,” said Som Sitha, head of WCS Koh Kong and Mekong Conservation Center.

“The team will either make artificial nests for incubation purposes or leave them as is,” he added. Considering the rarity of the species in the wild, the successful spawning is considered a great victory for Cambodia. “We expect to soon be able to produce large numbers of captive king turtles and release them into the wild,” said Steven Platt of WCS.

Since the start of the conservation program, dozens of king turtles have been released into the wild. The Koh Kong Reptile Conservation Center, the only facility dedicated to turtle conservation in Cambodia, currently has 192 king turtles and plans to release 50 this year.