Castex in Tunisia to “support reforms” in “a friendly country” 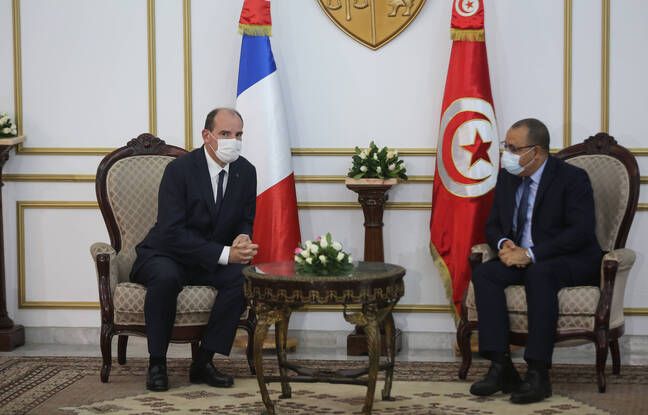 French Prime Minister Jean Castex, accompanied by several members of the government, on Thursday promised Tunisia assistance from Paris to “accompany the reforms” in this “friendly country” shaken by multiple crises and brought to its knees by the coronavirus epidemic.

Arrived Wednesday evening in Tunis, the French delegation was however immediately caught up with the news in France since the massive breakdown of emergency numbers forced the Minister of the Interior, Gerald Darmanin, and the Secretary of State for Digital, Cédric O, to return in the night, just after a dinner with the head of the Tunisian government, Hichem Mechichi.

An imponderable which marginally modified the program of the day Thursday, articulated around the holding of the 3rd Franco-Tunisian “High Council of Cooperation” (HCC), which follows those of 2017 and 2019. This meeting takes place in a context strained by the structural crises experienced by Tunisia at all levels – political, social, economic, migratory – and further aggravated by the pandemic.

During an economic forum, Jean Castex pledged to “support the reforms undertaken by the Tunisian authorities which aim to increase its attractiveness and improve the business climate”. “These reforms are important for Tunisia, for the Tunisian people and for the Franco-Tunisian partnership,” said the head of the French government, highlighting the privileged links between the two countries, France being for example the first partner commercial of Tunis.

“In ten years, Tunisia has changed a lot, but also France and other countries. Change comes with threats and opportunities too, ”Prime Minister Hichem Mechichi explained.

As part of the partnership with this “friendly country”, and while a rebound in the Covid-19 epidemic recently raised fears of an oxygen shortage in Tunisia, the French government came with its arms laden with three generators oxygen for the hospitals of Sidi Bouzid, Sfax and Tataouine, 18 resuscitation ventilators, but also 38,000 antigenic tests or 240,000 FFP2 masks. A boat must also transport more than 4.5 million FFP2 masks within a week, said Matignon.

The emergency for the country is also on the economic level: heavily indebted, suffering from a breathless development model based on cheap labor, Tunisia hopes from the International Monetary Fund (IMF) a new loan over three years in return for promises of reforms.

If a meeting on the topic of digital took place Thursday morning and that some signing of agreements are planned – in particular 40 million euros in credits for the Office of the Merchant Navy and Bridges (OMMP) and as much for a ” program to increase resilience to natural disasters ”- France mainly committed a year ago to lend 350 million euros to support the country’s transformation until 2022.

“Total inefficiency of the system”

For now, 100 million euros have been paid and France is waiting above all for the effective implementation of the reforms promised to continue disbursements. Because the internal political situation generates significant blockages, in particular because of the standoff between President Kaïs Saïed, an independent academic, and the Islamist-inspired Ennahdha party, the main force of a fragmented Parliament.

“The French are unable to work with Tunisia because of the total inefficiency of the system”, analysis for AFP the essayist Hakim El Karoui, author in May of a note for the Montaigne Institute on stability from the Maghreb. As a consequence of this turbulence, migration and security issues should also be included in discussions with Kaïs Saïed and Hichem Mechichi, knowing that at present, 15% of migrants arriving by sea in Europe are of Tunisian nationality, constituting the largest contingent.

At the heart of the most sensitive discussions, and before a visit to the Bardo museum, the scene of a terrorist attack in 2015 (22 dead, including 21 foreign tourists), the return to Tunisia of a handful of individuals out of a few dozen registered in France for radicalization.